Pull up your your go-to news website, be it The Huffington Post, the New York Times, or Fox News, and scroll through the top stories in the politics section (or don’t – I certainly don’t want to be held accountable for any corresponding rises in blood pressure). I’m willing to bet there’s going to be at least a handful of articles in which pundits argue over taxation, and the role of government in the buying and selling of products. This is not a recent phenomena, and these arguments are not recent developments. Imports, exports, domestic trade. We, as a country, have been arguing the virtue (or lack thereof) of taxation ever since colonial days (the phrase “no taxation without representation” will undoubtedly bring up some middle school history class memories).

American whiskey has not been exempt from this perpetual argument. In fact, the very first article of taxation (and associated internal conflict) in post-colonial American history revolved around sale of distilled spirits. In a nutshell: whiskey producers and workers, as well as laborers who were quite uncomfortable with the idea of the newly-formed government taking a hand in their economics, joined together and revolted throughout the young nation. Thus began the aptly named Whiskey Rebellion.

George Washington gathered up 13,000 volunteer militiamen, and rather quickly put the rebellion down. Though 150 men were eventually arrested, only two were convicted of any crime. Their names? John Mitchel and Philip Wigle. Wigle was accused (and found guilty) of assaulting a tax collector and burning their house: treason. Mitchel and Wigle were sentenced to hang, but were spared by one of the nation’s first presidential pardons.

Flash forward a few hundred years, and now that aforementioned taxman-bashing house-burning renegade is the namesake of Pennsylvania’s own Wigle Whiskey. Be aware, however, that the Wigle brand offers more than just whiskey – in addition to bourbon and rye, their website offerings include gin, absinthe, grappa, and vodka; a wider range of products than one often sees coming out of American distilleries.

Now, we’ve written about Wigle a few times over the years, and have come away sharing some mixed reviews. I’ve found this isn’t uncommon for facilities that offer such a wide range of products. One thing that makes them stand out from the crowd, however is that Wigle prides itself in using “local, organic ingredients,” and makes sure that you know that they “never, ever purchase spirits from bulk suppliers” (unfortunately a rather common practice).

The Whiskey Wash reviewed a small cask version of their Pennsylvania Bourbon last year, and we thought it was… well, pretty okay. Today we come back to that flagship offering, now in full-cask production, and see how it compares. The first bourbon to be made in Pennsylvania after a 40 year industry quiet period, the Organic Pennsylvania Bourbon is made of a mash of “local organic yellow corn […] organic soft winter wheat, as well as malted barley,” and is aged in new-charred American oak barrels. The bottle I reviewed came with an age and batch number written on the side, and the company’s logo “Wigle,” printed in shining silver against a happy yellow background, the “g” of the logo hanging at an angle, as if hung by a noose, leaving one with the disturbing joint-images of walking happily through a field of daisies, and an arsonist ascending the gallows.

But it’s not the branding that counts (well, not usually), it’s how the whiskey tastes. So, let’s take a look. 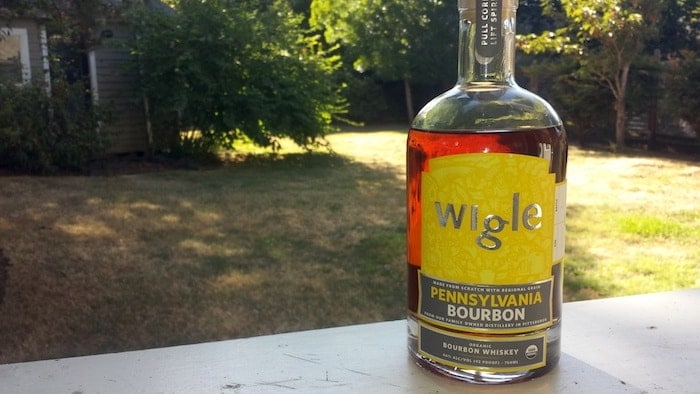 Vital Stats: The Wigle Pennsylvania Bourbon is USDA certified organic, and is made from yellow corn, winter wheat, and malted barley, and then aged in American oak. At 92 proof, the bottle used in this review was aged for 15 months. A 750 ml bottle will run you about $58.

Appearance: The whiskey is a deep, maple-syrup colored amber. In the glass it has thin, slow legs.

Nose: The nose is quite sweet: cotton candy, candied apple, and just a hint of peppered cinnamon

Palate: The palate hits you a bit sharper than one would imagine from the nose alone. A bit of jalapeno spiciness hits immediately before quickly fading away. Within and following that first sharp bite there is a good deal of sweetness. Yellow raisins, agave syrup, and red wine. A bit of a cloying taste lingers on afterwards at the back of the tongue.

I came into this one feeling hopeful – I’m kind of a sucker for most things that start off with “all organic” and “local,” and so I was rooting for Wigle here. The bourbon isn’t bad – certainly, I enjoyed my second glass more than my first – but it’s not great either. The sharp, shallow bite upon the first sip, and the saccharine twang that remained in my mouth after swallowing both took off some points for me. At almost 60 dollars, there are certainly better bourbons out there… but, in the same breath, I’m not sure you’re going to find many other USDA certified organic bottles in that bracket.