What Was the Whiskey Rebellion Anyway?

In recent news coverage about the militant group occupying a Federal Wildlife Reserve visitors’ center in Eastern Oregon (brr!), you may have heard a few references to the Whiskey Rebellion. But what was that, exactly? 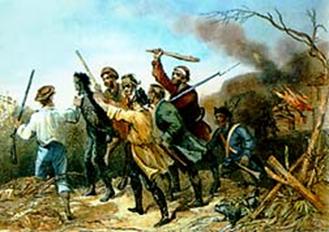 A tax collector is tarred and feathered by anti-tax frontiersmen during the Whiskey Rebellion. Image courtesy of the TTB.

In 1791, the brand-new Washington presidential administration passed the very first internal federal revenue tax: an excise tax of $0.06 to $0.18 per gallon levied on none other than distilled spirits. The federal government also required that all stills be registered with local authorities.

As you may imagine, it wasn’t a particularly popular move. The tax was regressive, charging smaller distillers more per gallon than larger distillers who could more easily pass the increase in cost on to their customers. And at that time, spirits (particularly whiskey) were not only a popular beverage, but also served as a critical method of preserving crops for farmers without reliable access to urban markets, even acting as currency in some places on the frontier. (At that time, the “frontier” consisted of anywhere west of the Appalachian Mountains, and most of the Whiskey Rebellion played out in Western Pennsylvania.)

For workers and merchants paid in whiskey, the excise tax felt a lot more like an income tax – and one that residents of less remote regions didn’t have to pay. Farmers felt as if they were being taxed on their crop, while small, rural distillers resented what felt to them eerily reminiscent of the “taxation without representation” they had so recently fought during the Revolutionary war.

The response was strong. Many Westerners refused to pay the tax, driving tax collectors out of their communities and assaulting those who rented them offices or homes. The conflict grew more violent over several years, until a U.S. Marshal served a writ ordering one farmer, William Miller, to appear in Federal court in July of 1794. Miller’s extended family (and others incensed by the tax) formed an armed mob outside the home of the local revenue officer, and the conflict ended in a bloody shootout.

From there, the violence quickly escalated. Homes were burned and beatings, shootings, and killings increased in frequency. Finally, in September of 1794, President Washington led a troop of 13,000 volunteer Federalist militiamen on a month-long march through the Allegany Mountains to quell the uprising. They arrested more than 150 Whiskey Rebels, but ultimately just two men were convicted of any crime (and they were pardoned one year later).

Though the Whiskey Rebellion didn’t succeed in eliminating the federal excise tax on distilled spirits, it set a strong precedent for the Federal government’s authority to levy taxes nationwide. But did the Feds take distillers’ anger to heart? Not really. Today, the federal excise tax on distilled spirits is $13.50 per proof gallon, a figure I’m sure would send those Pennsylvanian rebels straight for their muskets.