It’s an election year in the US, which means that the time has come, and now gone with this week’s results, for some folks to overtly demonstrate their patriotism. For some people that might just mean hanging the stars and stripes in front of their house. For others, perhaps it’s expressed through voting, or volunteering at the local civic center. And for some people maybe it means buying American. Certainly, there are, for example, plenty of American whiskeys to choose from. But for some folks that’s not enough. Sure, you can buy an American whiskey… but that’s just a plain old bottle – a neck and some glass, maybe a cork… where’s the dazzle? Where’s the fireworks?

Well, don’t worry. American Barrels Bourbon has got you covered.

Have you ever thought that your whiskey might taste better, might feel a little more patriotic, if it were shaped like a shotgun shell? Funded by his parents and fueled by his love for his country, in 2014 then-24-year-old Mike Reed founded American Barrels Bourbon and made a bottle with the more patriotic of us in mind. 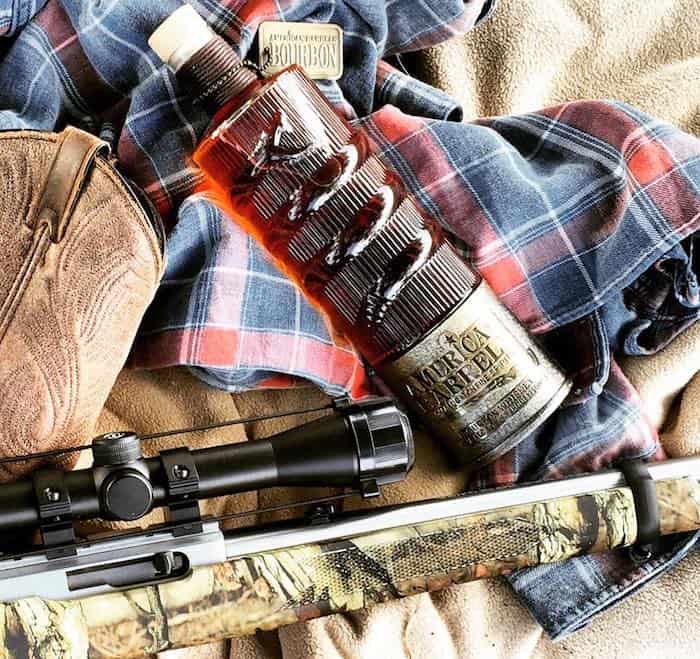 In his words, “The bottle embodies two things Americans hold dear – whiskey barrels and gun barrels.” The bottle is shaped like a shotgun shell, with a plastic-etched faux-metal priming cap at the base. Engraved along the face is a snake, jaws open in defiance; printed on its back is the phrase – you guessed it – Don’t Tread on Me. The bottle is complete with a hemp-wrapped neck with a – I’m not kidding – metal dog tag label attached as some sort of tribute to our Armed Forces. Reed describes how vision of the whiskey bottle came first – and how the whole whiskey-as-a-drink part seemed to follow after. In his words, “With an alcohol business, 90 percent is marketing and 10 percent is what’s inside the bottle.”

Distilled and bottled in Charleston, South Carolina, American Barrels Bourbon – the company’s sole offering – advertises itself as “small batch,” but gives no age statement. In fact, they seem to scoff at longer-aged spirits, “We drink our bourbon because it tastes good, not because it has been sitting in a barrel for 10 years.” The brand looks as if it is utilizing a technology owned by whiskey producer Terresentia (who produces whiskeys for a number of other smaller companies). This technology uses an ultrasonic refinement process to speed up the aging by using sound waves to make chemical reactions in the bourbon occur faster than they normally would – cutting down barrel time from several years to several hours.

While this is certainly good for production, what about the consumption of what’s in the final all American bottle? Let’s see whether American Barrels Bourbon’s taste lives up to its eye-catching presentation.

Vital stats: The American Barrels Bourbon is 90 proof, and is made with 60% corn, 36% rye, and 4% malted barley mash. Aged for an unstated amount of time, and filtered in “a post-barrel ultrasonic refinement process,” it comes in a 750 ml and retails for about $30.

Appearance: Light almond, a little on the watery side.

Nose: The nose is sweet, and a bit nutty and spicy; like cardamom mixed with chocolate with a hint of over-ripened mango.

Palate: The first sip is mostly alcoholic burn – more than you’d expect for 90 proof. The flavor palate opens up a bit after, and has overtones of melon, toffee, and just a hint of bubble-gum. A back of the tongue bitterness lingers afterward.

American Barrels has already put their own priorities in print: “90 percent is marketing and 10 percent is what’s inside the bottle,” and those priorities show in the tasting. The bottle makes for a funny story when you bring it to a party – but you’ll have most likely brought it there because you know you won’t be drinking it at home.

7
Shares
6.7k
Views
Share on FacebookShare on TwitterGet Our Newsletter
Get The Macallan® Rare Cask at ReserveBar. Shop now!