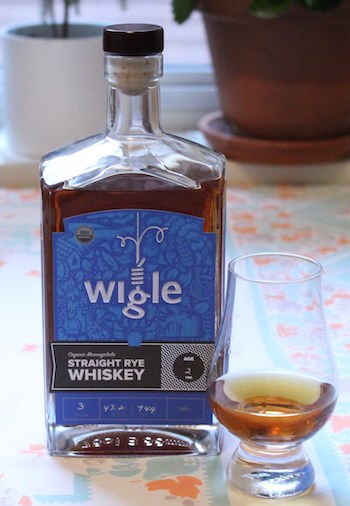 The story of Wigle Whiskey hearkens back to the birth of American whiskey, which, they are quick to remind us, began not in the South, but in the Northeast.

While the South may be today’s spiritual home of American whiskey, its geographic birthplace is indeed the Northeast. American whiskey historian Chuck Cowdery writes in his seminal history of American whiskey production, Bourbon Straight, that “although corn was known, grown, and probably distilled in colonial times, most colonial whiskey was made from rye, a familiar Old World grain,” and that “there were well-established rye whiskey industries in Maryland, Virginia and Pennsylvania before settlers ever pierced the Appalachians.”

Wigle Whiskey’s name is a reference to Philip Wigle, a Pennsylvania distiller, who apparently “unwittingly helped spark” the Whiskey Rebellion in the early 1790s. Wigle was sentenced to hang for his crimes against the government, but later pardoned by George Washington; however, the Pennsylvania tradition of producing rye whiskey remained, and flourished—becoming known for a rye style known as Monongahela, or Pennsylvania, rye.

By the time Prohibition wrapped up some decades later, consumers started moving away from rye whiskey in favor of more mellow Canadian whiskey (imported illegally during Prohibition), and sweeter corn whiskey. Although the American palate shifted away entirely from whiskey by the end of the 1960s, we are now again in an American whiskey renaissance. Rye, in particular, is a major recent beneficiary of this growth.

History lesson aside, Wigle Whiskey practices grain-to-glass distilling methods, sourcing local, organic grains. Their rye expressions run the gamut, but the one I tried, Wigle Straight Rye Whiskey, is their oldest expression that’s been aged at least two years. This spirit is made in the traditional Monongahela rye style (what Wigle calls the “big, rich, spicy cousin to every other rye whiskey”) that helped American rye become so popular. Wigle’s Straight Rye whiskey is 65% rye, aged in new 53 gallon barrels. I tasted batch #3, which was 47.2% ABV.

Appearance: Medium light in the glass, Wigle Straight Rye Whiskey already looks more appealing than it does on the shelf. The square bottle with its bright blue label adorned with rain clouds and a noose make for an imperfect first impression.

Finish: The finish brings white pepper from the palate, in additional to cardboard and fresh green pear. The finish itself is quite short and light, not leaving much of an impression of the dram.

Wigle Straight Rye Whiskey certainly proves the mildest, lightest body rye I’ve ever tasted. A true ghost of a whiskey, it hardly leaves a trace or impression. In a world of ryes all yelling to be heard, Wigle slips away into the ether. I would recommend Wigle to a brand new rye drinker hesitant to get too spicy, or someone who is primarily an Irish whiskey drinker but who wants to branch into American expressions.