Like many of us, during months and months of stay-at-home orders, I have cottoned onto a number of television shows that are either new, or new to me. One of those shows is Billions. I was on a streak of tearing through programming about extremely horrible and wealthy people; I’d plowed through Succession right before this.

There is a reason I am sharing this anecdote: The significant number of times people on Billions pour whiskey—Michter’s whiskey. I knew I liked this show for a reason!

I started delving into exactly how many times Michter’s has been featured on the show—fun! And how did I miss the cast going to the distillery: A Whiskey Advocate article shares details about how the actors “tasted through a range that included Michter’s US*1 rye, US*1 bourbon, 25 year old straight bourbon, 25 year old straight rye, and the coveted Celebration Sour Mash (94 points from Whisky Advocate, with a retail price of roughly $5,000 per bottle).”

I have coveted Wendy’s wardrobe season after season and now I have something else of which to be extremely jealous.

I’ve written bunches about them over the years on this here blog, and so I am not sure what else I can share about the quality I have come to expect from Michter’s, so I’ll let some of their recent news show it: According to Michter’s, as well as on our own website, in July 2020 a private barrel selection bottling of Michter’s 10 Year Kentucky Straight Bourbon established a record for a barrel of bourbon when it was sold for over $209,000 at auction.

But before we get into the tasting, let’s take a step back: What does it mean to call a bourbon a straight bourbon, anyway?

Regular bourbon must adhere to certain requirements, including the following: It needs to be produced in the U.S., made from a minimum of 51 percent corn, distilled no higher than 160 proof, aged in new charred oak barrels at no more than 125 proof, and achieve a minimum of 80 proof at bottling.

Designating a straight bourbon means the whiskey follows those guidelines as well as ages in that charred oak at least two years. It earns the designation of Kentucky straight bourbon if it follows this and is distilled and aged for at least one year in Kentucky.

Let’s see how this one stacks up. 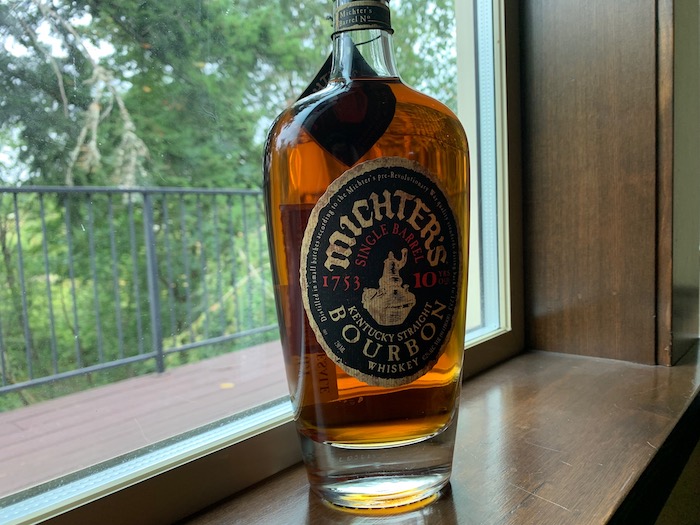 Vital stats: Well, it’s 10 years old, as indicated in its name. It’s 94.4 proof (47.2 percent alcohol by volume), distilled in (you guessed it) Kentucky. A bottle will run you about $150.  This whiskey is stored in Michter’s heat-cycled warehouses, allowing for more interaction between whiskey and the wood without over-oaking it.

Appearance: Orange-tinged, like the nicotine-coated walls from an old friend’s apartment who smoked. Reddish in the bottle, and orangey in the glass. Toffee, like the center of a bite of Almond Roca.

Nose: Fruity! Tart cherry, mango, candied orange. Strongly alcohol on the nose: More bananas foster than banana split. A little paint thinner but that’s not the end of the world; it grounds the whiskey, somehow.

Palate: This is smooth, and not too sweet. Although the fruitiness comes in on the nose, the palate is cereal grain and smoked chili pepper; more rye-like than a typical bourbon, in my opinion. A little thinner, more astringent than some of the other Michter’s I’ve sampled. It comes in a little hot. If you have sensitivity to heat you will want this with ice, for sure, or a couple drops of water. I’d personally go sparingly with the water. Since this isn’t as strong in the palate, I feel like this would taste watered down kind of quickly. To me, this is not the pinnacle of what Michter’s has put out. It’s very good, don’t get me wrong, but I kind of like to roll a little bit of heaviness in my mouth, the sink and swish of heft. This isn’t it.

Palates do run unique, like fingerprints, however. The boyfriend tasted this too. His tasting notes went something like, “Easy to drink. Not real strong on the initial bit. It’s kind of soft. Underwhelming on the initial taste, but kind of mellow and warming. It took a second to kick in, like a large turbo.”

I didn’t find this particularly complex. I liked it, but I wanted to be more swept away. If I could give this 3.85 stars, I would. It’s not quite a 4, and it’s not a 3.5. I want to give it the edge over a 3.75, too. It’s pleasurable, but if there were other Michter’s in the lineup, I’d choose another bottling.