Michter’s! What else can we say about Michter’s whiskeys that we have’t said already? I believe Michter’s needs no introduction because you should know by now that Michter’s is solid. Michter’s is like the high school quarterback who doesn’t lose a game, the guy who parts the crowds like Moses just by walking down the hall. Good looking, popular, solid. That’s Michter’s. The quarterback who can write an essay.

But let’s briefly rehash: According to Michter’s in announcing the May launch of their 10 Year Single Barrel Kentucky Bourbon, “ Michter’s has a long legacy of offering traditional American whiskeys of uncompromising quality. With each of its limited production offerings aged to its peak maturity, Michter’s highly acclaimed portfolio includes bourbon, rye, sour mash whiskey, and American whiskey.” Also, in January 2020 Michter’s was named the #1 top trending American whiskey brand by Drinks International in their annual brand report for the 2nd year in a row.

I have been lucky to get some of these bottles in my hot little hands, including the 2019 (which got five stars) and the 2017 (4.5 stars). So I was psyched to see if/how the 2020 version lived up to its predecessors. 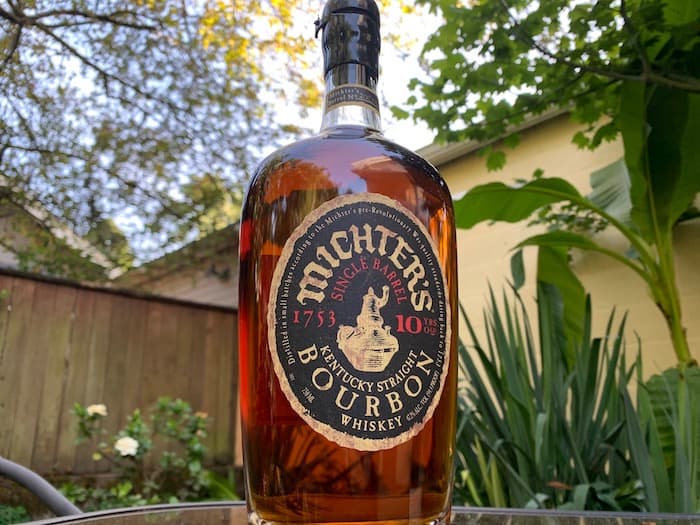 Appearance: It looks light in the bottle, but there’s a depth to it in the glass. It’s the color of the orange that shows up on a tortoiseshell kitten. Or the hue of cinnamon bark, with a fine dusting of nutmeg. Fall is here!

Nose: To all the other Michter’s I’ve sniffed before: You’re less strong than this one. This whiskey punches a little assertive. Cinnamon comes through the nose as well as eyes. I smell a more exotic fruit blend than the usual cherry: Think dried mango. Even pandan.

Palate: Once again, Michter’s refuses to disappoint (and given 2020, THANK GOODNESS FOR THAT). I will say it doesn’t have the caramel or butterscotch quality I consider common among the other versions I’ve sampled. This is gingery, more savory. You will get an initial kick. Almost rye-like. This is not dessert, this is dinner. It reminds me of a curry in that there’s a lot going on but there is an end result that’s fairly cohesive.

There’s a slight sourness, but it’s balanced–like the pickled mango you might find alongside a Indian curry, The mouthfeel is a little thinner than others, too. That said, it’s still tasty AF.

My vet recently informed me that my cat “has opinions.” Well, so does this bourbon. It’s not sweet and gentle. It’s complicated. Is it worth $130? (Well, it’s cheaper than the last vet bill, so.) Besides, if you like Michter’s, you already know the answer.