This looks familiar, I thought to myself as I eyed this bottle. Not that it’s Michter’s, but because it’s the 10-year version. I rummaged in my liquor cabinet: Aha! There it was. And then I rummaged around online: There it was, too! I had reviewed it here two years ago. (That is what happens when you have a lot of whiskey; you go through it slowly. Funny how two years goes fast when you have a lot of whiskey.)

That is my moderately long-winded point that I like Michter’s and have for a while. It’s one of my go-tos, and not just because Michter’s and I both have shared Pennsylvania roots. It’s interesting because in 2017, I’d written that it was one of the first releases from their master distiller Pam Heilmann, who had become one of the first women to serve as a master distiller at a Kentucky distillery since prohibition.

But as of this past May, Heilmann’s retired, as we reported, and replacing her is her protege Dan McKee. McKee, according to Michter’s, is quite ready to take on this role, having worked alongside Heilmann for a decade, first at Jim Beam and then at Michter’s. This is thus among McKee’s first bottlings. 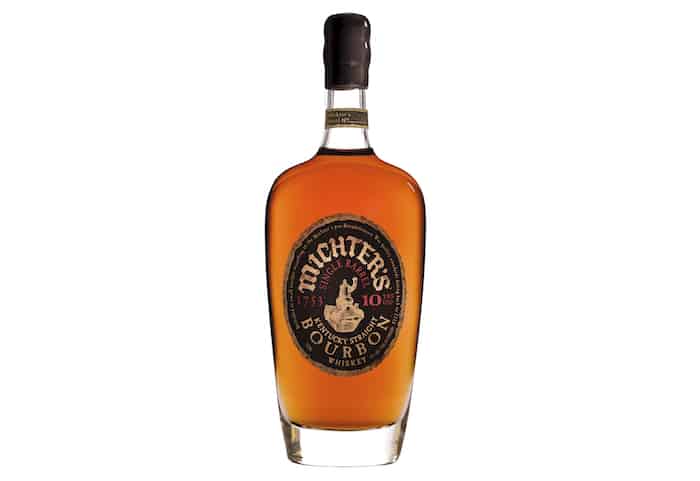 Appearance: Intense copper: A brand new penny, and shiny penny loafers. It’s almost neon; it glows. I could probably pour a glass and use it to guide my way if the power went out. It might also have other fun applications then, too.

Nose: Rich and desserty and complex. I am already excited about tasting this. Caramel corn, marshmallows, chocolate-chocolate chip cookies. Fresh figs. Oddly: lavender. And a little bit of sage.

Palate: This is spicier on the front end than you would think, given the sweet nose. But it mellows into a Nilla wafer finish, and a rich smoothness that coats your mouth and throat in a delightful way. Also a little cinnamon but not like a mouthful of it, like a cinnamon challenge (do not try this at home). Sugar cookies. But all this isn’t too sweet. It’s not sugary—but it carries with it the heft of a satisfying dessert.

I tasted this and compared it with my 2017 bottle. I liked it then, but now that I taste the 2019, there is much more complexity to it. It has a heavier weight. I like that, though I can see how some might not. I feel like the 2017 is fine, but honestly the 2019 is really great. It’s quite a high mark for bourbon. The 2017 is drinkable, but this is … gulpable? But don’t. Savor it like a great novel.

That’s something I’ve noticed about Micheter’s. It’s satisfying. It’s never steered me wrong. It’s balanced. Never too much of anything, and what it is, is great. I would happily take this any time. I feel like Michters will always be there for me. It’s a warm hug. Or a cool breeze when you need it. Or the day that ends up going much better than you think. Michter’s doesn’t ask for much but it gives big back to you. This bottle isn’t a cheap date, but it’s worth it. (Ahem.)

Read More Whiskey News
Whiskey Review: Laws Whiskey House Four Grain Straight Bourbon
5.0
User Rating 3.33 (33 votes)
Sending
61
Shares
12k
Views
Share on FacebookShare on TwitterGet Our Newsletter
Cheers to the Dads! Personalize a bottle of his favorite whiskey to create a modern gift for the modern man. Use code: FATHERSDAY20 for $20 off your next order of $100 or more at ReserveBar