A lot has happened since April 2019. But what is time, really, in this day and age (which is what, again)? My point is, it’s been two years since Louisville, Kentucky-based Michter’s put out their Barrel Strength Kentucky Straight Rye.

As we reported this past March, it’s par for the course for Michter’s to have their rye distillate for their eventual whiskey enter the barrel for aging at 103 proof instead of the higher standard industry proof. They do this because—even though it’s pricier in terms of barrels and warehousing—they think it means a better whiskey.

And as the barrels age, they increase in proof, and as this is a barrel strength whiskey, they don’t add water. So what goes in at 103 will increase in proof. In this case: a range of about 107-112 proof. Michter’s Barrel Strength Kentucky Straight Rye is a single barrel rye, and each barrel of it is bottled at its particular alcohol level at the time of bottling. The average proof is 110.3 proof.

I have made my fangirling of Michter’s pretty evident on this blog. I just think they’re a class operation and they put out some seriously great product.  I’m not the only one who thinks so. According to a recent press release, Michter’s was named the #1 Top Trending American Whiskey brand by Drinks International in their Annual Brands Report in January 2021.

However, I am not as well-acquainted with their ryes as their bourbons. My experience with their bourbons is that they’re sweet but well-balanced, with a mouthfeel and finish close to Werther’s Original butterscotch discs. I was curious if this rye would carry over some of that sweetness? Or maybe more of a chewy cereal quality? So curious. Rye-curious. 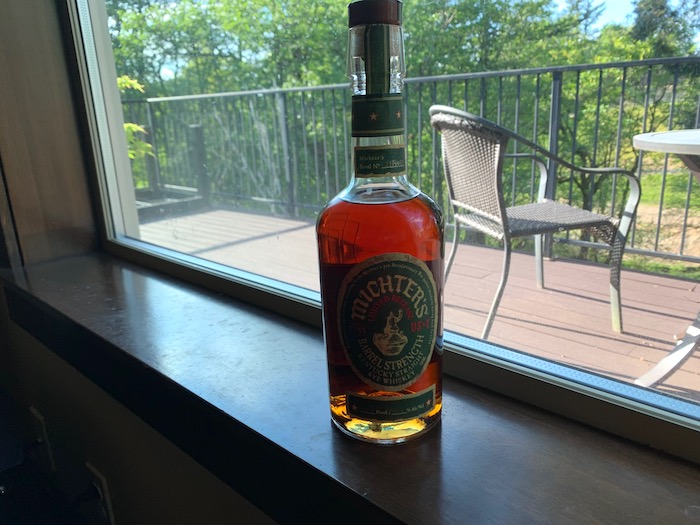 Appearance: A gorgeous and blazing red-gold in the bottle. In the glass, it’s more orange. Kind of like a shiny rust.

Nose: There’s that Michter’s buttery-ness. Like a high-fat melted butter. A big ole dab of hot, salted melted butter oozing onto a baked potato. Corn on the cob, slathered with butter. And vanilla caramel. Caramel corn! It smells like a county fair! (Guess my age! On second thought, please don’t.)

Palate: Hmm. Interesting…kind of. Based on the nose, I’d expect this to come across sweet and rich. But it’s not. It’s kind of the opposite, actually: dry like a Sauvignon Blanc. A little thin on the palate. There’s some heat, but it simmers in the background and does not overwhelm. I can see this as more of a high-proof drink companion than a standalone sipper. It’s fine, but it might benefit from the company of others. I wanted a little more depth, but luckily I have plenty of their bourbon to turn to when I need that need met.

I like it, and bonus that it’s available nationally and internationally, and it’s probably worth the $100 you’d pay for it, but I wanted it to take me on a wild ride, you know? Still a solid buy, if you encounter it.