For a long time, Irish whiskey was just Irish whiskey. Now that new private brands have entered the marketplace alongside experimental releases from the old guard, there are many styles and subcategories to explore. Here’s a rundown of the types of Irish whiskey available and who’s producing them. And remember, it need not be St. Patrick’s Day to celebrate Irish whiskey!

Pot Still: A mash of malted and unmalted barley, distilled, naturally, in a pot still. Without the word “single” attached to it, this is most likely an indication that the liquid was sourced from different distilleries for the final blend, though most pot still whiskey in the mass marketplace is single pot still.

Pot still whiskey is only legally produced in Ireland. In general, these whiskeys tend to have a more grainy, spicy weighty character owing to the unmalted barley component. Pot still whiskeys became the most common type of Irish whiskey into the 20th century because beginning in the late 1800s, whiskey from malted barley was taxed at a significantly higher rate. Distillers began cutting their whiskey with distillate from unmalted barley to avoid the fees and turn more of a profit, and the style became the norm, though it fell out of fashion in the 1960s with the rise of single malt Scotch and popularity of less pricey blends.

Single Pot Still: A mash of malted and unmalted barley, distilled in a pot still and produced at a single distillery. Most typically this indicates the whiskey was triple distilled. This is the most common variation and includes all the “spot” whiskeys (Green Spot, Yellow Spot) as well as the Redbreast range.

Pure Pot Still: A now outdated labeling category that went out of circulation in 2011, which means the same thing as single pot still whiskey. If you have a bottle of Irish whiskey labeled as such, consider yourself lucky to own a vintage bottle!

Grain Whiskey: The mash consists of different grains, typically corn or wheat, and is distilled in column stills. Most of these are used as a blending agent, though Connacht Whiskey Company has released Ballyhoo – a four-year-old Irish grain whiskey.

Single Grain Whiskey: This is a very confusing term. What it means is that it is grain whiskey produced a single distillery, however more than one grain might go into it. Typically the mash bill mostly consists of corn, with a small percentage of barley in the mix, and results in a light to medium bodied style, such as the one from Teeling and Greenore 8 Year Old, Egan’s and Kilbeggan Single Grain.

Single Malt: A mash of 100% malted barley, distilled in a pot still, produced by a single distillery. Single malts are legally produced all over the world. In Ireland, they tend to be triple distilled. It must be aged in oak (typically ex-bourbon casks) for at least three years. This has become a very trendy style to compete with its famous siblings in Scotland, Japan and the United States. Every single malt has its own unique characteristics, some carry age statements, and some don’t, and it’s worth tasting a few like Knappogue Castle, Tyrconnell, The Irishman, Spade & Bushel, The Quiet Man 8 Year and Tipperary, just to name a growing few.

Copper Pot Irish Whiskey: You might see this term on a whiskey label like Writer’s Tears, which contains a blend of pot still and single malt, but no grain (column stilled) whiskey.

Blended Irish Whiskey: Even with all the varieties available, this category still constitutes the majority of Irish whiskey in the marketplace. It is a blend that could contain any of the above styles in a variety of combinations – pot still and/or grain and/or single malt. The original expressions of the most popular Irish whiskeys such as Jameson, Bushmills, Powers and Clontarf all belong to this category, as well as the premium bottlings of Midleton. This category is sometimes referred to as “traditional” Irish whiskey on a label.

Small Batch Irish Whiskey: Producers such as Teeling release this style of whiskey, marrying a small selection of casks that are specifically chosen for their characteristics and blended in small batches to achieve a final flavor profile. 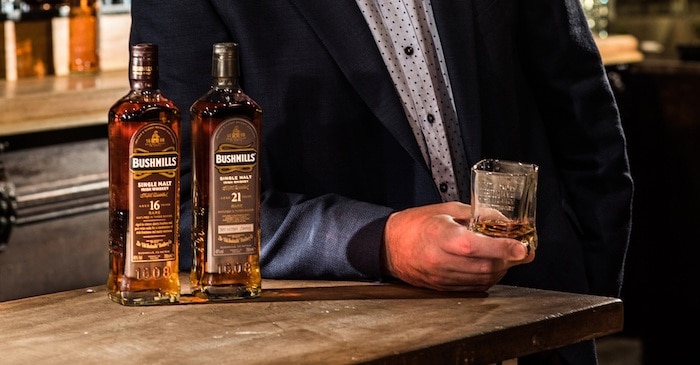 Cask Finished Irish Whiskey: This could refer to any of the above styles that is fully matured in traditional casks (ex-bourbon or new oak), then placed in a non-traditional cask (ones that once held sherry, port, madeira, any type of still wine such as cabernet or chardonnay, and even other spirits such as rum, rye whiskey, etc. ) for an additional amount of time. This category is also sometimes referred to as “double cask” or “twin wood” or even “triple wood”, depending on how many additional steps of maturation went into the final blend of the whiskey. This often experimental interpretation is well on trend, most recently with Tullamore D.E.W.’s brand new Caribbean Rum Cask and last falls’ Cider Cask, as well as Tyrconnell 10 and 15 Year Madeira casks, Prizefight (finished in ex-rye casks), Slane Triple Cask (virgin oak, seasoned oak and sherry casks), the range of Jameson Caskmates and Redbreast Lustau Edition.

Peated Irish Whiskey: Though many whiskey drinkers gravitate toward Irish whiskey specifically because, as a rule, it isn’t peated, there are some producers who have experimented with releasing expressions using barley that is peat-dried for extra smokey flavor profiles. The most famous and popular brand is Connemara from Kilbeggan, however other producers have been tinkering with some experiments, including those wacky kids at Teeling, who have snuck some into their rare blends, and we should expect more Irish peated whiskey in the future

Potcheen/Poteen/Poitín: Depending on the Gaelic spelling preference, this term refers to unaged distillate produced in a pot still (the word means “little pot”) anywhere in Ireland. This is essentially the Irish version of moonshine, meaning that it was produced and sold illegally, presumably under cover of night, either for private consumption or to skirt around excise agents. In 1661 home distillation was made illegal, though in the mid 20th century, some distilleries were able to commercially produce unaged whiskey for sale only in the Irish republic. It wasn’t until 1989 that commercial poitín could be legally exported from Ireland. In 2008, coinciding with the rise of craft distillation in the states, Irish Poteen (and its various spellings) was given legal Geographical Indication (GI) status. And so, much like American moonshine, it’s become trendy for Irish distilleries to produce a legal version of the thing that was once prized and glorified for its illicit connotations (however some of it, like the range from Glendalough, is actually pretty tasty).

Farm-to-glass/farmer-stiller: Though releasing sourced distillate for now (like many independent brands like Teeling who only recently opened private distilleries), a new category can soon be added to this list. Expect to see more from distillers growing their own barley for their whiskey in the coming years, such as from Clonakilty in County Cork – who specialize in heirloom barley – and Tipperary Distillery, who specialize in single malts from barley grown on their Ballindoney farm.