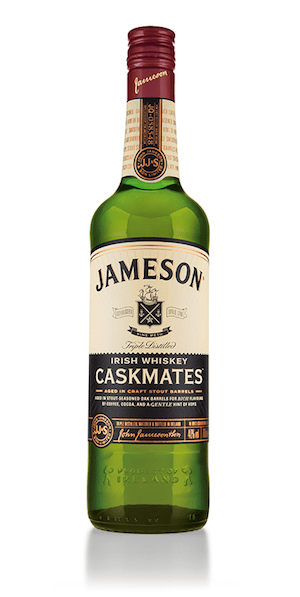 We also welcome Rachel Grozanick to our review team!

Finally, this whiskey was provided to us a free sample to review by the party behind it. The Whiskey Wash, while appreciative of this, did keep full independent editorial control over this article.

For many, Jameson and Guiness are Irish alcohol. Whiskey and stout. It seems only natural that a combination of the two should arise. Enter Caskmates.

The word “edition” here has got us wondering — are more craft brewery barrel shares in the works? It’s an intriguing prospect, especially as the stout edition is a successful collaboration. Made from the same malted and unmalted barley, corn, and water, tripled distilled in pot stills, and aged for at least three years as all Jameson whiskeys, Caskmates Stout Edition departs from tradition in flavor more so than smoothness.

Whereas Jameson Original is light, floral, and a little fruity, Caskmates Stout Edition is caramel-y and creamy. It still has a light mouthfeel and a smooth finish with just a little burn but instead of grassy fruitiness, there’s the richness of butterscotch. The nose is especially different, showcasing burnt sugar, toffee, and campfire scents.

Jameson isn’t the only whiskey-maker inspired by beer. New Holland has a Beer Barrel Bourbon and Charbay Distillery in California actually distills finished beer to make it’s Whiskey R5, using Bear Republic’s Racer 5 IPA. However, it’s still a bit of a novelty — one that Jameson has done well. Really, it’s not that much of a leap when one considers that Jameson typically ages its whiskey in bourbon barrels from the U.S. and fortified wine barrels from Spain. Why not beer barrels from Cork?

So despite the fact that John Jameson was actually a Scot and that the company is now owned by French conglomerate Pernod Ricard, Jameson Caskmates is still a thoroughly Irish whiskey, combining Irish whiskey traditions, with Irish stout flavors. And, if one were to believe Jameson, it all started in the most Irish way possible: a brewer and a distiller walk into a pub…

Nose: Bold at first, but mellows significantly after the first second or two. Hints of campfire mingle with burnt sugar, oak, and hay. There’s a touch of isopropyl heat buried under spice, vermouth, and toffee.

Palate: Up front, demerara sugar and caramel cream together with a lush maltiness and butterscotch. Midway through, a slight smokiness, again of campfire, enters alongside a vanilla sweetness. Once swallowed, it’s quickly succeeded by a whiff of bitter hops, and a much more prominent spicy burn.

Jameson Caskmates Stout Edition is smooth (even smoother than Jameson Original), and picks up some richer flavors from its beer barrel aging. Those richer, deeper flavors work remarkably well with its still-light mouthfeel. Enjoyable neat, its accrued flavors of would nicely lend it to an Irish coffee or an emerald. Overall, a happy marriage between whiskey and stout.