Before we go too far, be warned that Greenore Single Grain Irish Whiskey will likely be tough to find in your local liquor store.

Greenore comes from Killbeggan Distilling Company’s Cooley Distillery in County Louth, the company and distillery behind brands like the exceptionally peaty, single malt Connemara as well as 2Gingers, their more ubiquitous answer to Jamieson and Tullamore D.E.W.

Greenore has more recently been rebranded under the eponymous Kilbeggan 8-year-old Single Grain. 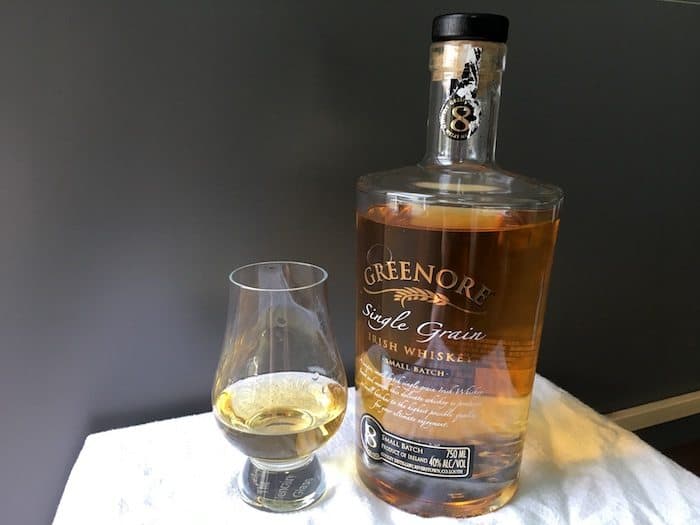 Vital stats: 8-year-old, small-batch single grain sold in a 750-milliliter bottle at about 40 percent alcohol by volume. I seen reports that its aged in bourbon barrels like its Kilbeggan cousin. It is sold for somewhere just under $50 per bottle.

Nose: Hits the nose heavier on smoky spice, forward with oak, sandalwood, allspice and a touch of orange. That smoothly turns into a smoky but creamy vanilla, earthy, mellow, and rich to the point of almost tasting like caramel.

Palate: Hits the tongue with that same earthy, smoky vanilla flavor in the nose, but this time heavy on the sweeter, richer side with very faint touches of spice. That sweetness sticks around for quite a while, though, while the spicy flavor only builds to a slightly perceptible taste of allspice and cloves with a faint tickle of cinnamon on the tongue after a few seconds. Those spices come to the fore after swallowing, but even then, their flavor stays pretty mild in the rear roof of the mouth while most of the tongue stays pretty well soaked in the in earthy vanilla flavor.

While I really like a dram of sweet whiskey, Greenore takes that a little too, far even for me. The base flavor of earthy, creamy, slightly smoky vanilla bordering on caramel is delightful, but it mostly just hangs in your mouth with very little development as it sits. It certainly delivers a consistency between the nose and the palate, but that comes at the expense of character and subtlety. All that said, this isn’t a bad whiskey. It’s smooth and sweet with a bit of spice and smoke, and it might make a decent introduction for someone transitioning to whiskey from sweeter beverages.

However, for someone with a lot of whiskey experience, I’d save this one as a mixing component or for when you want something sweet with nothing to object to – and nothing to ponder.