Let’s first discuss what makes ‘Single Pot Still’ something special. For starters, it’s the only whiskey making process that is unique to Ireland. In contrast to single malt, single pot still indicates use of both malted and unmalted barley in the mash bill, which provides a unique “spiciness” indicative of this unusual style. This method was first attempted in the 1800s, not as a way to improve flavor, but as a way to cut costs. Luckily for 19th century whiskey distillers, the grain variance along with the use of traditional pot stills added complexity instead of an air of cheapness. Besides Green Spot, only a few other examples (Redbreast and Powers among them) are readily available on American liquor store shelves today.

The Midleton Distillery makes this particular brand under the guidance of Mitchell & Sons, an Irish wine distributor which grew out of a small provisions market in Dublin. In the late 1800’s, Mitchell & Sons would deliver their empty wine casks to the Jameson distillery to be filled, then returned to the Mitchell’s cellar, and eventually aged and sold through the small shop. Green Spot, named for a colored marking on the wooden barrel, indicated a 10-year aged product. Today, Green Spot bears no age statement, but is blended from whiskeys between seven and 10 years old aged in both used sherry and bourbon casks.

Special editions of Green Spot, including one with additional finishing in used French oak wine casks, have begun to emerge in line with similar industry experimentation, but setting a base line with the classic formula is the first step in understanding the small sect of Single Pot Still Irish Whiskies. 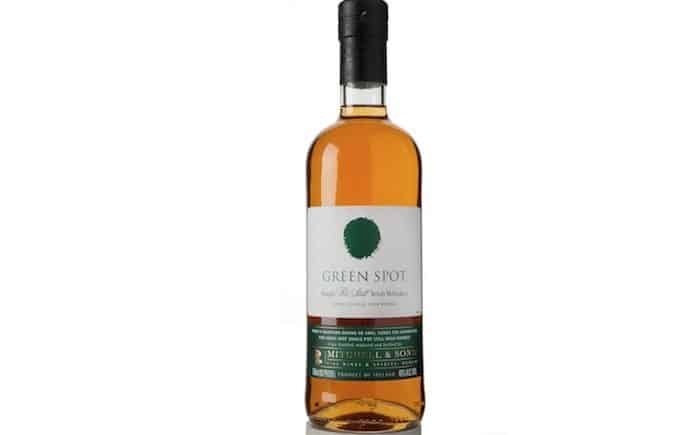 Vital Stats: 80 proof. Distilled from malted and unmalted barley. No age statement, crafted from a blend of seven to 10 year old whiskies. $40/700ml

Appearance: Green Spot pours somewhere between sunburnt straw and light amber, and possesses a regal clarity and brilliance in the glass. Its impressive legs are slow to droop and the body of the whiskey ripples like jelly when swirled fervently. This whiskey is inviting in its appearance but possesses a sly hint of warning within its caramel-colored depth.

Nose: The first inhale drags a bright cloud of tropical fruit over my palate, surprising as it is mouthwatering. Notes of golden raisin, guava, and papaya scream loudest, and palate acclamation brings subtler hints of cantaloupe, treacle, and dusty, spicy oak in to later breaths. There is a pronounced green apple tone that is more reminiscent of candy than actual fruit, and it lingers all throughout each breath in a very soft and balancing fashion.

Palate: The first noticeable expression of deviation from single malt is evident in the mouthfeel here, as it seems both rounder and thicker, but with a more tannic finish and less sweetness present. Up front, this whiskey provides some prune-like notes of dark, weathered fruit. A sharp but not overwhelming alcohol bite exists mid-sip, and the aftertaste lingers pleasantly with the cinnamon, vanilla, and brown sugar flavors one with associate with snickerdoodle cookies. There is also a grassy earthiness that rides along subtly like the green apple, providing a complex contrast against the flavors of perceived (but not present) sweetness.

With the exception of some over-fruity phenolics in the aroma, which reveal themselves especially boldly towards the end of a glass, it's very hard to find fault in this particular whiskey. It may not be the most mind-bending or exploratory in flavor, but it's constructed with finesse, care, and respect for tradition. I'd be happy to sip on this whiskey any day of the week.