Another Brewery, Kentucky’s Goodwood, Joins The Whiskey Side

There’s been a trend developing in recent times that sees well established craft breweries in various markets pushing into craft whiskey, including Dogfish Head, Deschutes, Rogue and SanTan. Whether that’s because of looking for new revenue streams or a desire to further innovate, or a little of both perhaps, the bottomline is it can usually result in some quality whiskey results. Now getting into this is Goodwood Brewing out of Louisville, Kentucky.

The new Goodwood Stout Bourbon, according to those behind it, is a 12 year old, sourced bourbon (it had been said at one point this might be bourbon sourced from some of those infamous barrels that survived the Barton distillery warehouse collapse – such is not the case apparently). This bourbon, after its time in new American oak, is finished for a further period in ex-Goodwood Bourbon Stout barrels. These barrels were, ironically, previously bourbon barrels themselves before being filled with stout by the brewery for aging of the beer. After bottling that ale the barrels then had this new bourbon put into them. 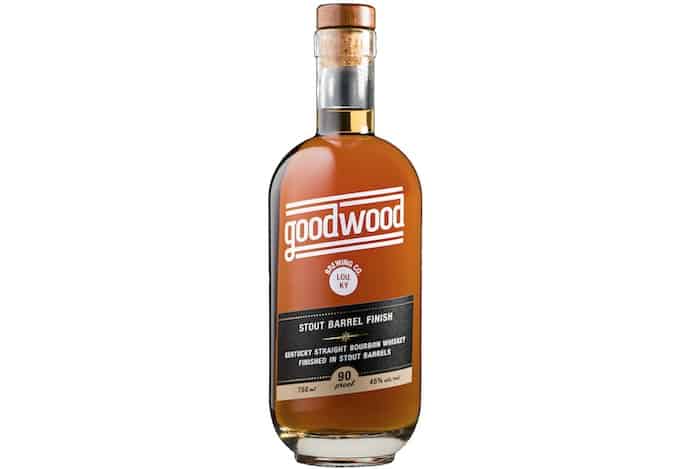 “Bourbon has always been an integral part of the Goodwood product line with our barrel aged program,” said Goodwood Brewing CEO Ted Mitzlaff in a prepared statement. “We are located in the heart of bourbon Country and understand the tremendous impact barrel finishing has on creating superior taste profiles. We are extremely excited to launch our first of many spirit expressions and believe the consumer will enjoy our Stout Bourbon as much as we do.”

Plans call for the Goodwood Stout Bourbon, bottled at 90 proof, to become available this month in Kentucky. Very limited official tasting notes suggest that the “stout beer-barrel aging lends malt sweetness and a cocoa character to the robust whiskey tones of vanilla and sweet caramel.”