Oh Rogue Ales & Spirits out of Oregon, how we so much want to love your whiskey. We really, really do – from the look at face value of how your spirits side has matured in its operations – all seemed like a solid green light in the progression of producing better quality brown spirits. And then we review them and, well, you can read about that yourself. As for me, I’m gonna try the reset one more time and let folks know about your new Stouted Whiskey.

Rogue Rolling Thunder Stouted Whiskey, according to those behind it, is a limited in scope bottling designed to take one deep down the rabbit hole that is the Rouge operations. What’s you’ve got here is a 11.4 proof American single malt whiskey (a lower proof version is in the works as well) that’s been distilled entirely from barley grown on Rogue Farms, normally for the purposes of making the brewery’s popular Dead Guy Ale. Instead distilled from the wash of this comes the unaged white whiskey for this new expression that’s then put down for one year in new Oregon oak (Quercus garryana, also being used by the likes of Westland and Eastside in the Pacific Northwest) barrels that were coopered at Rogue’s very own Rolling Thunder Barrel Works cooperage in Oregon. 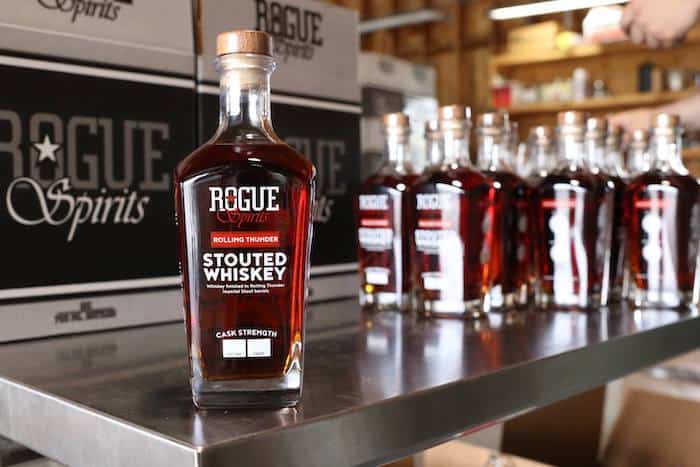 As if this didn’t make this whiskey Rogue enough already, it is then aged for another two years in barrels which previously held Rogue’s Rolling Thunder Imperial Stout. What you’ve essentially got now is their Dead Guy Whiskey all pumped up on extra ABV steroids and Imperial Stout influenced…will this make a difference in scoring higher in a future review? We will find out soon enough, but it should be noted this whiskey recently took home Gold in the American Single Malt category the Luxury Masters competition.

Should you want to seek out a bottle of this, it is available mostly in Oregon and also at select Total Wine locations nationwide. Only a few hundred cases of it were released (more coming in 2019 we are told), pricing somewhere north of $50 for a 750 ml bottle. Tasting notes for it indicate “aromas of fresh shaved cocoa, graham crackers, coffee and spiced baked apple. Hints of smoke and sea air. Flavors are complex with dark chocolate, toffee, vanilla, dried fruit.”

22
Shares
870
Views
Share on FacebookShare on TwitterGet Our Newsletter
Get The Macallan® Rare Cask at ReserveBar. Shop now!