The Dogfish Head craft brewery out of Delaware is something of a craft beer pioneer, having been in the beer making business since 1995. They established a distillery in more recent times and, much like fellow pioneer Rogue Ales did out of Oregon, have now gotten around to debuting their first in-house whiskey.

Dogfish Head Alternate Takes: Volume 1, according to those behind it, is distilled from a rather unique beer wash. More specifically, it is a “complex beer consisting of mostly specialty malts, including Applewood smoked, coffee kiln and crystal malts” that’s fermented with Dogfish Head’s Doggie Ale yeast. After distillation it is aged new charred American oak barrels, before being finished in ex-rum casks which previously held the brewery/distillery’s Barrel Honey Rum (a rum made with sugar cane molasses, honey and aged in American oak). 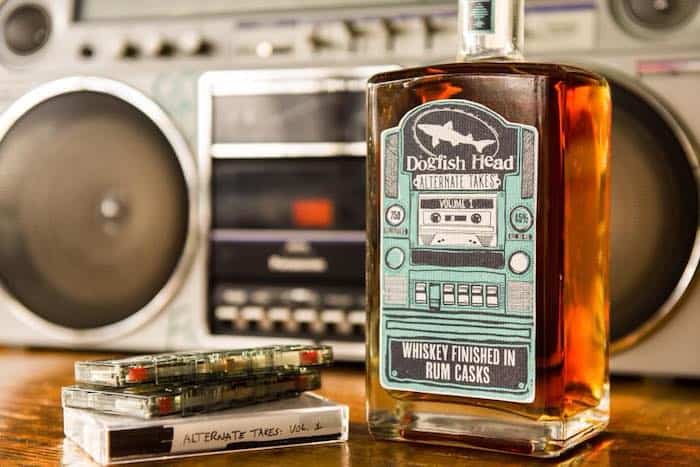 “We approach each creative moment at Dogfish with a thirst to push new and out-of-the-ordinary ideas to the furthest limit,” said Sam Calagione, Founder & CEO of Dogfish Head Craft Brewery & Dogfish Head Distilling Co., in a prepared statement, “as no liquid concoction is out of bounds, and each take on it is part of the artistic journey. Our Alternate Takes whiskey series is an ode of sorts to the mad chemistry of R&D distilling, and we’re super excited to share this creatively fresh take on Whiskey Finished in Rum Casks with our Delmarva friends.”

This new American whiskey will initially be available in Delaware, Maryland, Virginia and Washington D.C. It is bottled at 45% ABV, and limited official tasting notes suggest “candied nuts & peppery cinnamon finish with mild smoke & cocoa.” It should be noted as well that “Alternate Takes” is a reference to music artists exploring alternate sounds during recordings until the right sound emerged – the concept is being used by Dogfish Head through exploring alternate barrel finishings.