The Wheel Horse Bourbon follows on the heels of their previously released rye under the same label. Thus far, the label’s releases have been proofed down to 101 and aged two years or more. The rye, thus far, has gotten a solid reception, especially with the competitive price point at close to $30 per bottle.

Wheel Horse Bourbon is distilled and aged at O.Z. Tyler distillery. The distillery was built in 1885 and was the first one in Owensboro, Kentucky. Another fact, it was the 10th, ever, to be licensed in the state. Over the many years of its existence, the spot has changed hands several times. It happens a lot in the industry. It also burned down in 1918 and was resurrected after prohibition.

One thing that I did notice however, was that a certain name keeps on popping up in regards to the spot. In 1939, members of the Medley family got together and bought up the distillery. Unfortunately, it was eventually bought and sold again, but members of the family stayed involved with production for decades. Whiskeys that you may know that have stemmed from the distillery include Ezra Brooks, Mellow Corn, Old Medley, and Wathen’s.

“It has been an honor to carry on the 135-year tradition of this historic distillery, which was recently renamed so we could better honor its storied past,” said Jacob Call, Master Distiller at Owensboro Distilling. “We reopened for production in 2016 after being closed for about 25 years, and Wheel Horse was one of the first national brands to show off our whiskey. We’re excited to partner with Latitude Beverage again on the release of Wheel Horse Bourbon. You’re going to love it.”

What can be said of this bourbon from a technical perspective is that its aged between two and four years, non-chill filtered and distilled from a mash bill of 70% corn, 21% rye, and 9% malted barley. 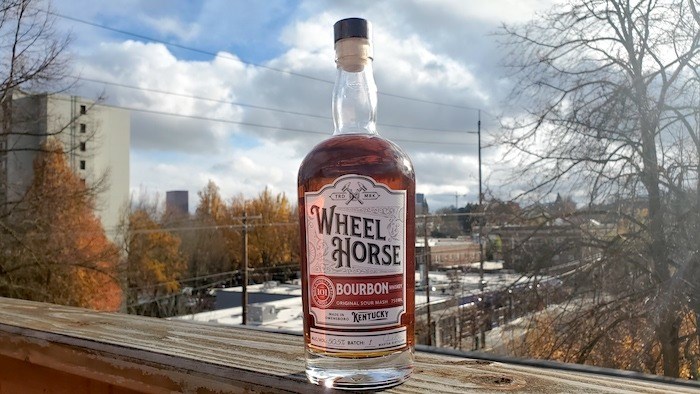 Appearance: A darker shade of copper, bordering on brown with orange highlights. In the glass, there were several long legs along the side.

Nose: There wasn’t much depth to this one. Brown sugar and molasses dominate with oak. Given the proof, was expecting more heat, but the whiskey’s nose was remarkably balanced.

Palate: The whiskey tastes like it smells. The terms sugar and spice come immediately to mind. Molasses and some rye spice for sure, with a medium body and lingering finish. It took a few tastes, but there was another element in the background. Towards the end of the taste, there’s a subtle presence of candied pecan.

I found this bourbon to be a nice winter sipper, at least on it's own. The price is right, simple and unassuming. At 101 proof, it's a good one to have around when it's cold out.

However, given the flavor profile, I believe this whiskey is meant for cocktails. Most likely for the classic old fashioned or Manhattan. I'm guessing it'd make for a great egg white sour, if that's your jam. At the end of the day, it's a solid but simple whiskey and the addition of another flavor component would make for a great pairing.