Upon receipt of this bottle, I noticed that there’s kind of a lot of things going on. Though, in retrospect, not highly unusual. Breaking it all down, it’s a rye whiskey done with a secondary toasted barrel finish. It’s done at barrel strength, which should also be noted. In any case, the last time that Michter’s did a toasted rye whiskey was back in 2017.

Over the years, there have been multiple expressions of toasted barrel whiskeys care of Michter’s. To memory there have been a bourbon, a sour mash, and rye versions. Personally, my favorite thus far has been the bourbon, but that only inspired the curiosity as to what the rye may have in store.

The most recent Michter’s US*1 Toasted Barrel Finish Rye Whiskey, according to those behind it, is created by taking fully matured Michter’s US*1 Single Barrel Kentucky Straight Rye at barrel strength and then further aging it in a second custom barrel made to the specifications set by Michter’s Master of Maturation Andrea Wilson. It was crafted by her, in conjunction with Michter’s Master Distiller Dan McKee.

“For this 2020 release,” said Wilson in a prepared statement, “we selected rye barrels aged to peak quality and then dumped each barrel, with the contents of each single barrel being put in a second single barrel assembled from 24 month naturally seasoned and air dried wood. The second barrel was custom toasted to extract characters to create a rich and decadent rye whiskey experience.”

A few notes on the Michter’s aging process. Wood for their cooperage is aged in open air for 18-48 months before being assembled. Once the wood becomes barrel, it is toasted before charring. The reason for doing so is to enhance the caramelization of sugars from the oak and to reduce tannins. The team at Michter’s also begins with generally a lower entry proof to aging at about 103 versus more of a standard 125. Once again there is rhyme to the reason, as such requires less dilution, though generally less yield per barrel. 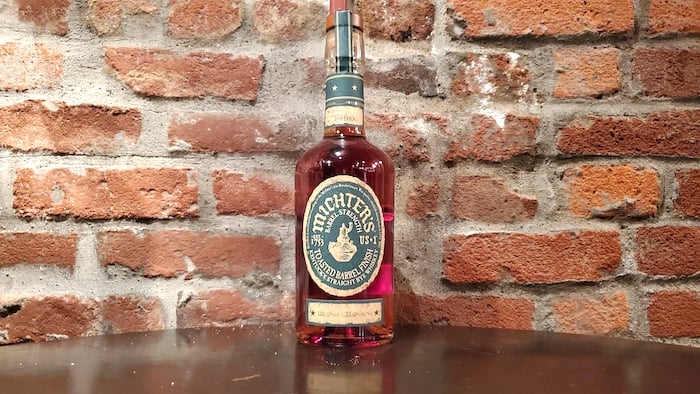 Appearance: This was a tough one. I would put this one at a mid-point between a deep red and brown. In the glass there were long slow legs and the appearance of some solid viscosity.

Nose: This is a big whiskey, starting with a lot of heat. Once you settle into the experience, one can pick up notes of bold rye spice mixed with a touch of maple sweetness. It took a while to identify, but eventually picked up a touch of English Breakfast tea in the background.

Palate: Relative to the nose, found this rye to be pretty simple. Spicy, with a touch of caramel of oak and some nuttiness characteristic of the toasted barrel finishes. There’s a lingering finish, possibly with some roasted marshmellow at the very end.

In a word, intense. It's big and unapologetic. On it's own, very bold with simple flavors. I'd recommend an ice cube or two to cool down the high proof. I do love the big whiskeys, but sometimes it takes a touch of water to get to that happy place. But everybody has their own take on how to appreciate whiskey, so, I leave it to you to make the call. In the end, this is a good one to have on your shelf for those fall and winter times to go with your streaming favorite shows or with friends.