It’s rather commonplace knowledge that whiskies including rye and bourbon achieve their color, flavor, and even part of their filtration through contact with charred oak barrels. But what exactly is a toasted barrel, and why has Michter’s set a course of experimentation with this alternative source of wood finishing?

As we wrote about earlier this year, the interior of these barrels is are exposed to heat, more gently then when traditionally charred, and the result is a wood that’s been toasted rather than burned to a crisp. Toasted casks are less frequently used in whiskey making, but they are employed, especially in the form of wine casks used for finishing. These casks often impart flavors like almond, coconut, cinnamon, and maple, as well as firm yet subtle tannins people often describe as “silky.”

According to Michter’s, the use of toasted wood in conjuction with their barrel strength US1 rye was twofold, “to enhance the spice character in the rye while adding hints of dark toast and smoke.” We first reported on this release back in September, noting Michter’s statement that the process had indeed “further enhance[d] depth and complexity.”

Given the littany of ‘double barrel’-type presentations that the whiskey world has been seeing over the past few years, including finishing in spirit casks and wine casks, it’s exciting to encounter a new and untasted experience in this realm. The liquid presented here is the result of two years of research and experimentation by Michter’s master of maturation Andrea Wilson and master distiller Pamela Heilmann. 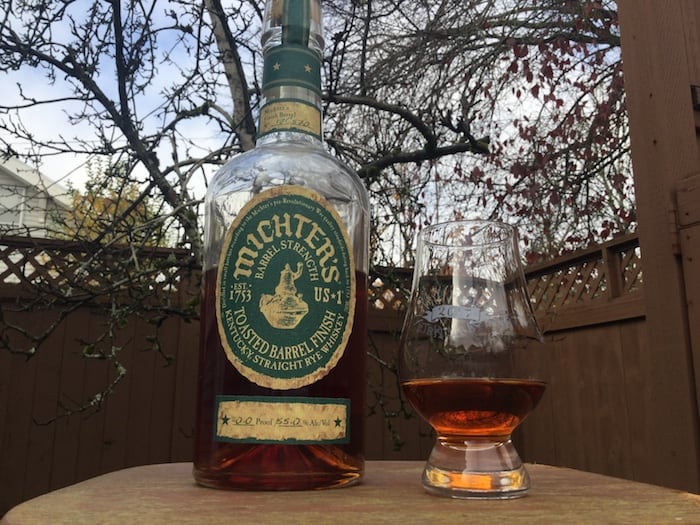 Appearance: This new Michter’s pours expressively amber, clear and displaying the definitive heft of barrel-strength viscosity. Legs layer up upon each other and cascade slowly, at times apparently unmoving, while coating the entire glass interior. The liquid wobbles as its swirled, and shows very little color separation around the edges.

Nose: The aroma of this rye is very pastry-forward, soaked in booze (of course), and dynamic. The smells of cinnamon and marzipan race to the forefront, showing big and lingering with each forward sniff. Whiskey soaked cherries appear here as well as hints of red-and-white candy canes and nutmeggy egg nog. Perhaps its the time of year, or this just smells like a holiday dessert table stuffed in to a tiny glass.

Palate: The aromas all translate beautifully and in balance to the first sip, although the rye itself plays a bit sweeter on the palate than expected. What I hoped would be a boozy intensity to supplement the baked goods in the nose reads more like an amped up brown sugar background. On one hand, the toasted oak served to really smooth out the heat, but limits drinkability as more of an after-dinner sipper akin to port or sherry.

What is amazing here, though, is the soft, sweet nuttiness from the double oaking. If I didn’t know better, I’d thought someone had stuck one of those old-school, crumbly toasted almond ice cream bars in the barrels with this deceptively strong, smooth rye.

This offering from Michter's is a near-perfect dessert rye, of which there are so few. However, if you're a lover of ryes on the grassier, pepperier side with more raw, drying wood than flavor-supplementing wood, you'll need to look elsewhere. In terms of experimentation, however, this double-barreled desserty treat is a raging success in terms of balance and unique results.