Who loves sequels? This girl–when it comes to Barrell bourbon bottlings. (I’m also an alliteration aficionado.) Barrell is a non-distilling producer, and each batch of their bourbon (and recently, their rye) varies from the others. They’re all truly unique—which can be both a blessing and a curse. When I find one I love (see Batch 006), it breaks my heart when I finish a bottle…because once it’s gone, it’s gone. And yet subsequent versions can be so intense and interesting; it’s like losing one love only to find someone else intriguing, albeit in a completely different way.

Barrell Bourbon Batch 015 is a mix of selected nine and a half, 10, and 11 year old straight bourbons from different distilleries and rickhouse locations in Kentucky and Tennessee. It’s all been aged in American white oak, and crafted and bottled in Kentucky. The mash bill is corn, rye, and malted barley; though the percentages of each aren’t disclosed, Maxim cites a low rye mash bill (about 12 percent rye) in this go-round. It’s cask strength, but lower proof than some of their earlier bottles: 107.6 proof (53.8 ABV).

Sure, everyone’s palate is different. But so is each bottling of Barrell bourbons. 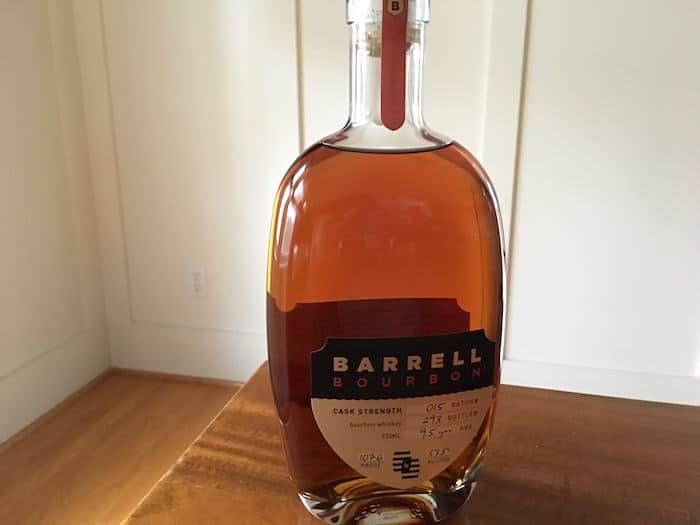 Appearance: Rich, gleaming mahogany, like the hardwood floors in an upscale cabin. It has a rich glow, too, like a very intense island sunset or a fire in said upscale cabin. There’s almost like a shine to it.

Nose: Extremely fruity, but not artificial or gummy-smelling. More like overripe bananas, like the kind that are ready for banana bread. Also, honeydew melon and apples. There’s some cookie-baking in here, too: gingerbread cookies fresh out of the oven. Vanilla extract.

Palate: I really dug this. It’s not as high-proof as some of the other Barrell concoctions, and they do a good job managing cask strength-potency regardless, so you generally taste more than just alcohol with their whiskies. It’s cinnamon-forward, and tingles a tiny bit on the lips, but has a rich mouthfeel that doesn’t burn. The fruitiness from the nose continues, and it’s complex and savory. I don’t often make food-pairing suggestions, but I think a belt of this–with maybe one ice cube–would be terrific with something like a chicken curry. Its sweetness would balance out the salty/savory.

I just love how each Barrell bourbon is so different. They’re all high-quality but some take you on a longer ride than others: This is one of those. Barrell Bourbon Batch 015 is like is one of those grand, sweeping movies that inspires you to even stay through the credits. It’s sophisticated, and you'll want to spend time sipping it and wondering how it all comes together.