It’s always a good day when I get Barrell whiskies to review. Over the past few years we’ve had the opportunity to try a lot of these here at the Whiskey Wash, and their efforts rarely disappoint. Most recently one of my colleagues quite enjoyed Batch 12, and a few months ago I got to try Batch 11. I’ve enjoyed sampling the varieties of what this non-distilling producer comes up with, and excited to test out what they develop now that they’re preparing to build out a distillery of their very own.

Batch 13 combines a five year old Indiana bourbon and five and eight year old Tennessee bourbons. The five year barrels have the corn-forward flavor and the eight year old provides structure and depth. This batch is 113 proof, and aged five years itself. It was distilled and aged in Tennessee and Indiana, and crafted and bottled in Kentucky.

Batch 13 marks the first time any of their bourbons have come from two separate states—and why not, really? We are a melting pot right? 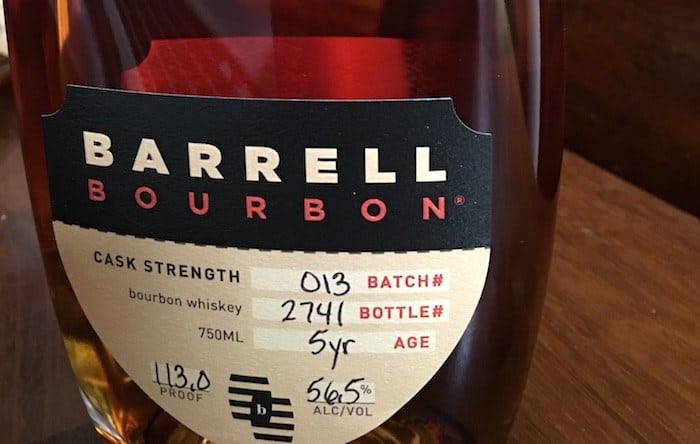 Appearance: Light yellow with a gray undertone Early Grey tea. More of a tan than a honey color.

Nose: Very savory. Corn beef hash, slightly smoky, though not like a smoked product. Sort of like if you’ve walked into a brunch place that specializes in barbeque—but also serves French toast. Also, hot aluminum foil. Like you’re pulling up a sheet of aluminum foil that earlier lined a pan in which you made a roast.

Palate The smokiness on the nose very strongly correlates with what I get on the palate: savory breakfast joint. I don’t like bacon (I know, I know, I’m broken inside. But we give the cilantro-haters a wide berth, maybe it’s time to do the same with the bacon-averse?) but this is kind of growing on me. It’s got more of a chewiness than some of their other bourbons, but variety is the spice of drinking, right?

I like Barrell’s new rye and some of their other bourbons more in comparison, but this isn’t terrible.That sounds like a backhanded compliment and I don't mean it that way. It's well-made and interesting and actually pretty good, though I have to say it's not as mind-blowing as their Batch 006 (long live that long-depleted bottle). This might do a terrific job in a Bloody Mary that uses whiskey instead of vodka, maybe? Try it out!