Whisky, From Paris, With Love

Do you know the true origin of the popularity of whisky in France? It all started at a time where spirits distilled from wines such as brandies, Armagnacs or Cognacs disappeared from the market  because of the phylloxera crisis in the mid 19th century when it struck the European wine industry. Since this crisis, imported aged whisk(e)y took over and gained in popularity in France. Besides pioneering production of the first French whisky in 1984 (Distillerie Warenghem – Brittany), 77 Whisky distilleries are running today.

Making whisky from Paris today is part of the new craft spirits French production world. Three draft distilleries opened between 2015 and 2019, producing not only whisky but other spirits such as gin, or rum or else vodka. 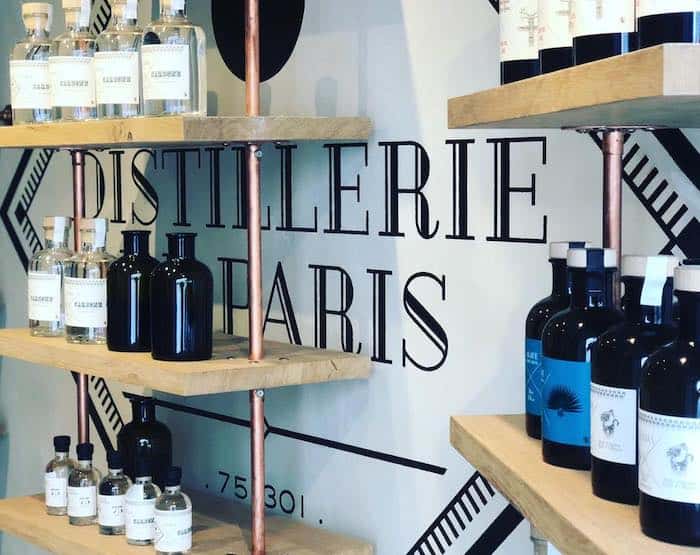 The two Juhlès brothers in 2015 created ‘Paris Distillery’ (Distillerie de Paris) on the rue du Faubourg-Saint-Denis (north of Paris). Sebastien is in charge of the mashing/fermentation steps and Nicolas of the distillation/aging ones. Distillerie de Paris produces gins, vodkas, rhum, brandy as distilled spirits. Furthermore, it produces a malted barley spirit aged for 2 years : the aged malt spirit marketed at 84 proof (42 % ABV).

In 2018 was released Distillerie de Paris Single Malt Whisky at 86 proof (43 % ABV) and aged for three years. Its specificity relies on an unfiltered mash, at the opposite of conventional Scottish mash, aiming to reduce aroma loss. Furthermore, Nicolas selects his own yeasts and long time fermentations, helping the development of more concentrated aromas. Finally, slight peaty notes hit this single malt aged in new oak barrels (100 litres – 22 gal US) from the Cognac region (Seguin-Moreau cooperage).

As an aid to age this whisky, several steps of air-bubbling and barrel changes take profit of the secular experience of Cognac aging. Blended from five different malts, the single malt taste signature is characteristic of aromatic cereal notes, cereal mash, tobacco, and presence of smoky, peaty and citrus hints.

Other people than fans would consider Nicolas Julhès as an U.F.O in this rational and technical distillation world. Yet, with the design skill of a perfumer its spirits bring pleasure and attractivity.

Founded by Eric Esnault and Christophe Astorri in 2017, ‘Spirit Factory’ (La Fabrique à Alcool) is located 40 km away for Paris (southern suburb) in a former beet molasses distillery. The idea to create a whisky distillery came into Eric’s mind because crafted whisky is a craze here as much as it can be since the early 2010s for other consuming goods.

The distillery produces whisky, and gins and vodkas from wheat mash. Eric’s son Corentin, distiller and master blender, created three gins and three vodkas. Use of distinct aromatic herbs allows the expression of gins. For instance, Graine de Paradis (Pepper Coast = Grain Coast) ‘paradise seed’ as called in French gives the Vodka Magma its specificity, thanks to the presence of spicy notes mixed with the smoothness of the wheat-based spirit.

With its whisky and whisky-like spirit, L’Esprit de Bière at 86 proof (43 % ABV) is a spirit distilled from malted barley beer. Aged in oak casks for 19 days, this spirit gives to this barley-based new-make flowery/fruity notes with wood hints. A three year old single malt, made exclusively from malted barley, yeasts and water, is planned to be released early 2021. Aging in ex-bourbon casks and in ex-Porto and ex-Bordeaux wine casks, this spirit will have a specific taste signature and fine wood notes. An organic certification is planned for this whisky single malt as well.

Olivier Flé is a farmer from the new generation that lives at 30 km north-eastern from Paris. Furthermore, he produces spirits with locally sourced grains. Olivier (President), Antonin van Niel and Michaël Landart are co-founders of ‘Isle de France Distillery’ (Distillerie d’Isle de France). With ‘field-to-bottle’ as leitmotiv driving their new business, the three friends decided to share their friendship, knowledge and passion for spirits when they created the distillery in 2019.

To follow the first run started in 2019, the release of a single malt is planned for 2022. Raw barley, corn and rye add diversity to other spirits of the distillery here, with distillation taking place in a copper pot still and aging currently performing in new French oak barrels, ex-bourbon casks, and ex-Côtes-du-Rhone Wine barrels, for the achievement of spirits with the most diverse aromatic profiles.

Now available, Le Gin at 89 proof (44 % ABV) is a gin using both fermentation and stewing, allowing the expression of a nose with crispy, spicy and floral notes. Cedar, lemon verbena, lemongrass and hibiscus flower extract express citrus notes, making this gin ready to drink neat or as ingredient in cocktails.

60
Shares
751
Views
Share on FacebookShare on TwitterGet Our Newsletter
Cheers to the Dads! Personalize a bottle of his favorite whiskey to create a modern gift for the modern man. Use code: FATHERSDAY20 for $20 off your next order of $100 or more at ReserveBar