What You Need To Know About Pairing Bourbon And Cigars

My opinion is a bit different in that I believe the aim is to achieve balance between both. For my palate, that comes with pairing lighter cigars fuller-bodied whiskey and vice versa. Why? Because if you have a full-bodied cigar and a full-bodied whiskey, those bold flavors will compete for your attention.

After realizing most people don’t question the old way of doing things, Bourbon historian Michael Veach and I began studying whiskey and tobacco pairings more closely a few months ago. Yet even as proponents of the “opposites attract” strategy, we wanted to study our own beliefs more methodically. 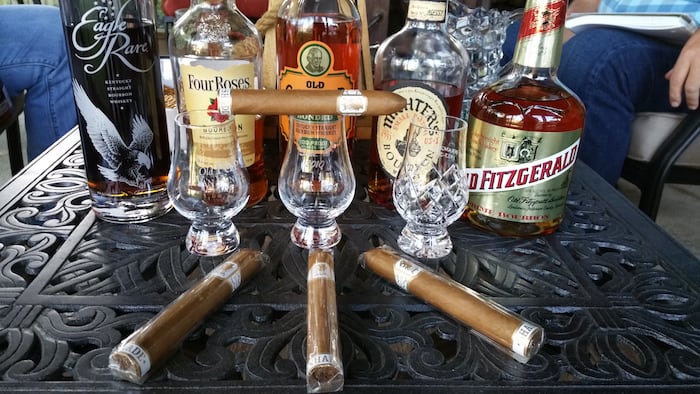 We began with a pairing of Padron 1964 Anniversary Series Box Pressed Natural Torpedo, which we tried with five different bourbons with different mash bills and proofs: Weller Antique, Russell’s Reserve, Old Granddad BIB, Four Roses Yellow Label, and Eagle Rare. What we found was that not only does mash bill play a role in creating an enjoyable pairing, but surprisingly proof plays an equal part as well. We decided that Four Roses Yellow Label was the perfect bourbon to pair with this cigar.

Throughout our studies, both published and unpublished, we have maintained a core set of bourbons while rotating in a new one here and there as needed. We don’t always agree on the outcomes: Michael liked the Four Roses Yellow Label best with the Surrogates Animal Cracker, while I like Old Fitzgerald Prime best. But one thing we’ve found repeatedly is that Four Roses Yellow Label seems to pair well with just about every cigar we’ve tried. Even if it’s not our top choice, it always comes in at least second.

With a Liga Undercrown Shade, Old Granddad BIB was both Michael’s and my favorite, though my second place went to Michter’s US1 and his went, again, to Four Roses Yellow Label.

We have also found some bourbons that don’t seem to pair well with cigars at all. While this warrants further investigation, I suspect it has something to do with fewer flavoring grains in the mash bill. I base this opinion on the inherently balanced nature of Four Roses Yellow Label: made up of 10 different recipes, all of which come from high rye mash bills.

Our broadest conclusion is this: Balanced, flavorful and low-proof whiskey will probably always lend itself to an enjoyable cigar smoking experience. Give it a try and let us know what you think.