When one thinks of Wild Turkey, the likes of good old Wild Turkey 101 Bourbon typically pop into one’s mind. While there are plenty of reasons to like this well whiskey, did you know there’s also a whole range of higher end (i.e. more expensive) expressions out their worth your time considering?

The five expressions in this review include two standard offerings (Kentucky Spirit and Rare Breed) and three limited edition offerings (Master’s Keep, Diamond Anniversary, and Forgiven). However, the “limited edition” aspect of Wild Turkey Forgiven may be a bit exaggerated, as Wild Turkey re-released it due to popularity of the initial batch.

So, without further delay, let’s see how these different offerings stack up. 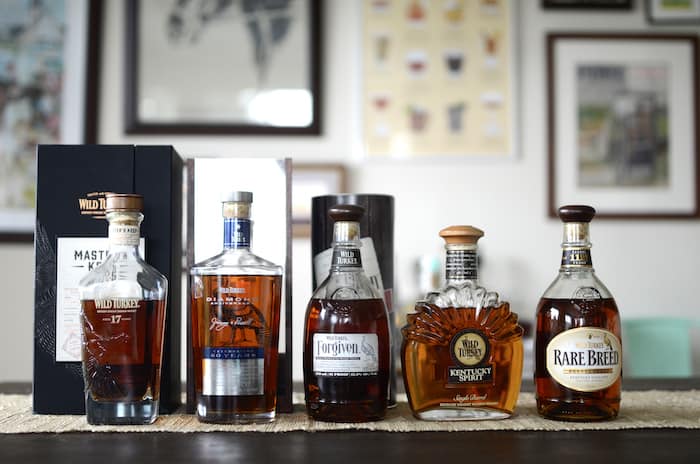 After filtration, the result was 86.8 proof. Master’s Keep was a limited edition release, but it can still be found on quite a few shelves for the suggested retail price of about $150.

Appearance: In a Glencairn glass, Master’s Keep appears a medium caramel brown. For 17-year-old bourbon, Master’s Keep is a touch lighter than may be expected, perhaps due to the slightly lower proof.

Nose: Master’s Keep emits strong barrel notes of seasoned oak, vanilla, caramel, and light cinnamon that blend with floral, citrus and light mint notes attributable to the rye grain. Overall, the nose is strong and there’s no doubt that Master’s Keep spent quite a bit of time in a barrel.

Palate: The classic Wild Turkey pepper and spice notes lead off the front, but these notes are much more subdued than younger Wild Turkey expressions. There’s a lot going on in the mid-palate, the spice notes from the front blend with light cream notes, tobacco, and even lighter tart apple notes. As one might expect from a 17-year Wild Turkey product, the finish is dry and includes light pepper and oak spice notes.

Master’s Keep is a unique offering from Wild Turkey that has a flavor to match. For a lower-proof whiskey, the flavor is surprisingly strong, which is likely due to the fact that water was not added to proof down Master’s Keep.

Appearance: Honey brown in a Glencairn glass. Similar to Master’s Keep, Diamond Anniversary is a touch lighter than one might expect from older bourbon, but perhaps the lower proof contributes a bit to this.

Nose: Seasoned oak and caramelized sugar dominate the nose and some light notes of vanilla make an appearance beneath.

Palate: Pepper and vanilla notes lead off the front of the palate and include light citrus. Some bitter seasoned oak notes arrives at the mid-palate and joins with sweet tobacco notes. The finish is light and dry, with seasoned wood and spice notes. Diamond Anniversary is well balanced with exactly what one would expect from a longer-aged Wild Turkey product. However, at 91 proof, the flavor just comes across as slightly pedestrian.

Diamond Anniversary is a nice, well-rounded bourbon. But, the 91 proof of the whiskey lightened the flavor profile, which resulted in an underwhelming whiskey. As a long-time fan of Wild Turkey, I cannot, for the life of me, figure out why this wasn’t released at the classic 101 proof. If considering the limited releases in this review, I’d opt for the Master’s Keep, and leave this one sitting on the shelf at $130.

As with all single barrel whiskeys, flavor from barrel to barrel will vary, but with any large distillery like Wild Turkey, all selected barrels will match closely to a standard flavor profile.

Appearance: Kentucky Spirit is honey-brown in the glass — definitely a lighter than the Master’s Keep, but only a fraction of a shade lighter than Diamond Anniversary.

Nose: Kentucky Spirit gives off strong black currant and spice notes that mingle with lighter notes of toffee, vanilla, cinnamon, dark fruits, and oak. If left in a glass for a bit, notes of cream and light mint become detectable.

Palate: Cinnamon and spice notes jump out at the front, as one would expect from any Wild Turkey product, and light notes of citrus and dark fruit blend in underneath. In the mid-palate, slightly bitter and dry notes of oak overtake the spice notes and blend with sweeter notes of brown sugar. The dry oak notes from the mid-palate drive the moderate duration finish, and some light sweet notes of brown sugar and cinnamon linger.

Generally, Kentucky Spirit seems like a more refined expression of Wild Turkey 101. Many of the good qualities people enjoy in Wild Turkey 101 are there, but the rough edges are more polished, and the additional time spent in the barrel makes an impression on the overall flavor profile.

Kentucky Spirit is an excellent choice for a Wild Turkey fan looking for a higher-end bottle to sip neat. My one reservation regarding Kentucky Spirit isn’t so much a knock on it as it is a recommendation of alternative Wild Turkey products over it. For about $10 less than Kentucky Spirit, you can get Rare Breed, which I think is a better product, and it clocks in at a higher proof – more bang for your buck!

If you really want to try a Wild Turkey single barrel expression, I recommend Russell’s Reserve Single Barrel, which is 110 proof, non-chill filtered, and the same price as Kentucky Spirit.

Vital Stats: Wild Turkey Rare Breed is a blend of 6, 8, and 12-year-old bourbon bottled at barrel proof. For the most recent batch, barrel proof means 112.8 proof, and Rare Breed retails for about $40.

Appearance: In a glass, Rare Breed has a honey and amber-brown appearance. Compared to the other Wild Turkey products in this review, Rare Breed is a touch darker with more reddish tones than the Kentucky Spirit.

Nose: Wood, cinnamon, and nutmeg really drive the nose, and some light sweet notes of vanilla and caramel blend underneath. Surprisingly, the nose is pretty mild for such a high-proof bourbon.

Palate: This particular batch of Rare Breed hits you square in the face with a strong cinnamon, nutmeg, and allspice notes right off the front. As surprising as the front of the palate, the mid-palate quickly turns sweet, with notes of vanilla, banana, and caramel. And yes, Rare Breed does one more somersault for the finish, the wood notes from the nose finally make an appearance, as the finish turns a touch spicy and dry, with some herbal notes and a slight sweet note of caramel.

There’s a couple interesting things to note that I think make Rare Breed unique. First, there’s a light spice note throughout the palate that you think is going to make the finish like drinking fire, but it never increases it just remains steady. Second, Rare Breed feels rich and velvety and coats your entire mouth, which makes that dry finish even more noticeable.

Out of all the Wild Turkey products sampled for this review, Rare Breed Stands out. To me, this bourbon is the right blend of proof, flavor profile, and price. At 112.8 proof and about $40 retail (although I used to snag it much lower than that at my local Costco), Rare Breed is perfectly suited for high-end cocktails. Due to the strong flavor profile, mixers in a Manhattan or Old Fashioned will not drown out Rare Breed.

Served neat, the blending of 6, 8, and 12 year-old barrels results in a rewarding drinking experience. Master’s Keep aside, as it is limited edition and $150 retail, for most folks seeking out Wild Turkey’s best expression, my recommendation is Rare Breed.

Appearance: Forgiven is honey-brown in the glass. Compared to the other Wild Turkey products in the review, Forgiven has the lightest appearance.

Palate: Citrus and cinnamon notes lead in the front palate, with some light floral notes attributable to the rye whiskey. As the whiskey develops, some oak spice and herbal notes develop in the mid-palate, and the finish is dry and short in duration with light oak notes, caramel, and a light touch of citrus carried over from the front.

By accident, Wild Turkey Forgiven jumps into an interesting niche, where the only other players are younger brands. Unfortunately, I don’t find Forgiven to add much by way of age, price, or proof. It is an interesting product, and one I’d certainly give the thumbs up to trying. But, I would also point whiskey drinkers interested in a bourbon-rye blend to High West Bourye.

If you’re looking for a readily available Wild Turkey product a step above the entry level Wild Turkey 101, opt for Rare Breed. Out of the two high-dollar limited edition releases, Master’s Keep is the better of the two. As for some other Wild Turkey products that may be of interest, Russell’s Reserve 1998 has been getting positive reviews, but will cost you a pretty penny if you find a bottle of the 2070 released.