The Sagamore Spirit distillery, as we touched upon back in the spring, is the whiskey wonder project of founder and CEO of Under Armour Kevin Plank. It is a medium size distillery out of Maryland, quite shiny and new. Up to this point, Sagamore has had just two offerings available, their regular sourced rye whiskey and a cask strength version. That’s changing now though with the unveiling of two limited edition bottlings.

Under what’s called the Sagamore Reserve label, according to those behind it, are Sagamore Reserve Double Oak and Sagamore Reserve Moscatel Barrel Finished. The first of the two is aged for four years before being placed into wave stave barrels and aged for an additional four months.  Wave stave technology is said to be a new and unique process consisting of using barrels with specialized grooves that age the whiskey quicker. The barrels are toasted, never hit with a direct flame, resulting in a high concentration of caramelized sugars. 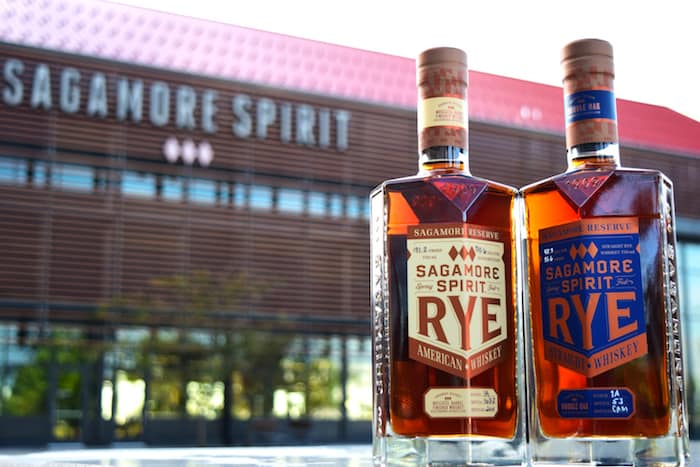 Double Oak, bottled at 96.6 proof inside of a bottle with a navy label, has very limited official tasting notes suggesting “smooth caramel and dark vanilla notes” and an “amber and warm chestnut color.” It will price around $60.

The Moscatel Barrel Finished, meanwhile, takes the base Sagamore rye whiskey and ages it for up to 110 days in Moscatel fortified wine barrels, sourced from the south of Spain. Only 20 barrels were acquired for this finishing process. It is bottled at 101.2 proof, and official tasting notes for it suggest “the rich fusion of dark fruits such as fig and plum, warm spicy notes of cinnamon and nutmeg and gentle sweetness.” It will price around $80.

“We are excited to continue to spread the word about Sagamore Spirit,” said Brian Treacy, President of Sagamore Spirit, in a prepared statement. “We are very proud of the addition of the two, new limited time offer whiskies, and we are certain they will provide new and exciting drinking experiences for our fans throughout the country.”