Last May, we reported on the release of Sagamore Spirit’s Rye Whiskey, a blend of high- and low-rye whiskeys sourced from Indiana, with a splash of spring water from Maryland to bring the final blend to proof. The spring water comes from Sagamore Farm, a fabled horse farm which sits atop a bed of precious limestone rock 22 miles outside of Baltimore.

According to Sagamore Spirit, this is the same water which “fuels our champion thoroughbreds.” The final product is crafted to fill another corner of whiskey’s niche market, Maryland-style Rye. We’ve seen small distilleries recently embracing this sweet-forward, less-spicy rye subgenre in recent months, and it seems extremely appropriate from a Maryland-based company.

Under Armour founder Kevin Plank is the whiskey enthusiast behind this project, bringing us the standard Maryland-style rye as well as a cask strength version, both using the fabled limestone water as the touch of authentic Maryland in a bottle. Sagamore Spirit President Brian Treacy recently said that the company’s goal is to “put Maryland back on the map as a premier distiller of rye whiskey,” and this flagship Rye is their first attempt at doing so (albeit distilled in neighboring Indiana.)

We’ve now had the opportunity to enjoy this particular piece of Maryland Rye revival for ourselves. 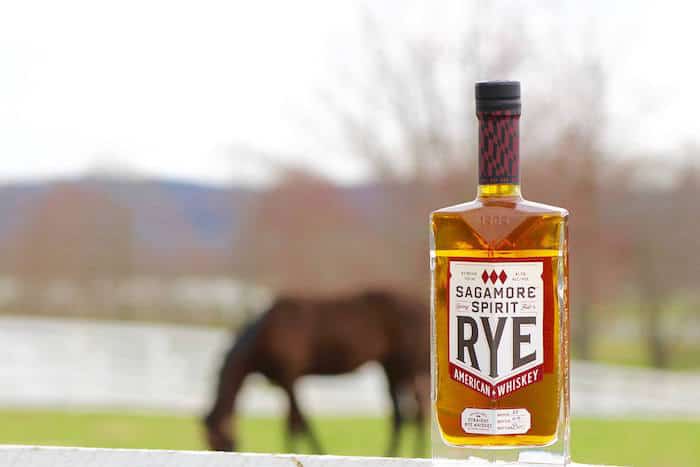 Appearance: This whiskey pours a dull, almost cloudy shade of light amber with an orange, even pinkish hue to it. The legs in the glass seem solid, forming small beads which trail, snail-like, down the glass’ interior.

Nose: This rye smells very inviting, mostly because it lacks any true power in the nose. A maple-like dark waft of sweetness leads, followed by a thick note of cherry pie filling. Some expected rye complexity exists here as well, expressing itself through counterbalance, upsetting the overall dessert-y aroma with notes of wood varnish and a slight mushroominess.

Palate: While the nose tends to confuse, the palate falls short of excitement but offers a more cohesive dram. The first sip leads off boldly with complementary vanilla and earthy rye spice, and carries the liquid across the tongue with a blanket of wildflower honey flavors that linger briefly.

Each sip leaves behind a dryness though, a husky peppercorn twinge and raw cinnamon stick followed by a dusty coating of oak, which serves to discard the style-defining caramel corn sweetness that a Maryland Rye drinker will be searching for. It’s inoffensive and repeat sips are easy (especially at this lower proof), but its expression of a niche style and sweeter ryes in general is a bit confused and lacking.

Sagamore Spirit is certainly making a step toward the revitalization of Maryland-style Rye with this product, and continued efforts seem necessary with the schizophrenic nature of the liquid in this bottle. The best part of this Rye is it's drinkability. I look forward to revisiting future incarnations of this product, although I'd hesitate to suggest you rush out and buy its current iteration.