The story of Baltimore, Maryland’s, new Sagamore Spirit distillery, which opened to the public a few weeks back, is in part the story of its founder, billionaire and CEO of Under Armour Kevin Plank. Some time ago, Plank decided he wanted to make whiskey influenced by the water from his Sagamore Farm. The ultimate goal was to help put Maryland-style rye back on the map and, if the impressive facility I got to tour just prior to opening is any indicator of how serious he and his team are, they could very easily achieve their desires in a short period of time.

During my tour I got the chance to ask questions of Rachel Cook, who is the director of brand development for the distillery. Note this interview is edited for brevity and clarity. 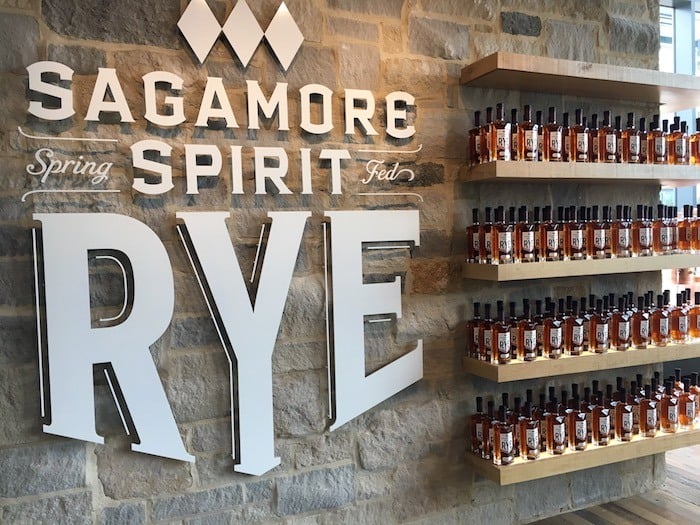 The Whiskey Wash: Sagamore has an interesting background and history, so tell us a little bit about that.

Rachel Cook: Sagamore Spirit started about four years ago, but really the vision for the spirit started from Sagamore Farm, which is about 22 miles from where our distillery is in downtown Baltimore. The farm is a beautiful 530-acre horse farm, and it sits on top of a limestone aquifer. At the base of the farm is an old springhouse that was built in 1909, and there’s no floor to the springhouse. Instead, there’s just a pool with bubbling water. And that limestone aquifer helps filter out the iron and retains all the calcium, which, as you know, is perfect for making whiskey. So we drive that water 22 miles from the farm down to the distillery, down the road that’s called I-83. And that’s why we have proofed our signature 83 to 83-proof.

TWW: Can you talk a little bit about the distillery itself and the history behind it, and what’s going on with planned production?

Cook: Right now we’re sitting in our distillery building, which is a 22,000-square-foot building. We have nine 6,500-gallon fermenters, a beer well, and also a mash cooker, and then a 40-foot mirrored finish copper column still from Vendome, which we hear is the only one like it in the world, along with three tail boxes. And what is very unique about Sagamore Spirit is we triple-distill our whiskey to help purify it and give it that smooth Maryland flavor. 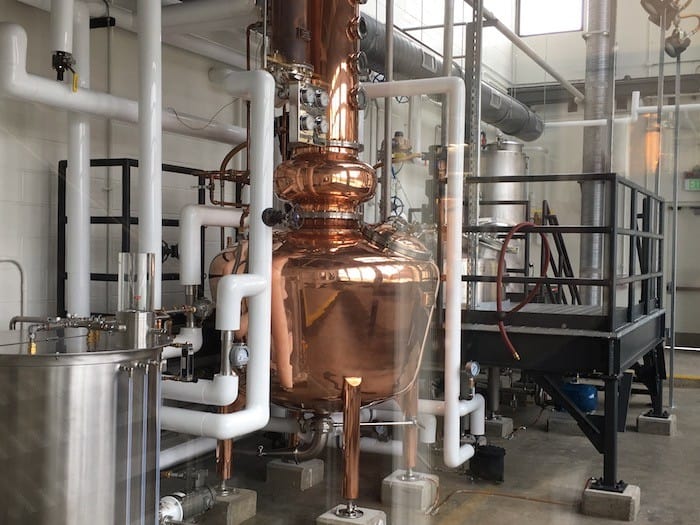 Some of the Sagamore equipment (image copyright The Whiskey Wash)

Next door to us, we also have a 27,000-square-foot processing building where we proof all of our whiskey, and where we also accept grains, and proof our whiskey down to 83 with the Sagamore Farm water.

TWW: You guys are sourcing from MGP [until your first in-house produced whiskey is ready to bottle], and clearly labeling on your bottle that it’s distilled in Indiana. Talk a little bit about what happens with that rye whiskey when it gets here to the distillery.

Cook: MGP makes a great rye, and unlike some other rye whiskeys on the market, we mingle two different mash bills, so we mingle a high rye whiskey and a low rye whiskey, and then cut it to proof with the springhead water from Sagamore Farm. When the barrels arrive here in Baltimore, we do all of the production process and proofing process here. So the production team dumps the barrels, tests it for quality, and then proofs it down to 83. We also do chill filter our whiskey here, and then do all of the bottling and labeling as well, which is all done by hand.

TWW: Are you doing any additional aging with MGP, or is it just straight from barrel to bottle?

Cook: Straight from barrel to bottle, right now. We do think that in the future there is some opportunity for doing some different things and having different expressions on the market. But right now, we’re laser-focused on our two products, which is the Signature 83 and the Cask Strength.

TWW: Can you talk a little about Cask Strength?

Cook: It came out around Christmas time, 2016. We do the same thing as we do with 83, we mingle the two different mash bills, a high rye and a low rye, and then add just a ladleful of that Sagamore Farm spring water to give it a smoother taste. And the Cask … each bottle will be different, each batch will be different, and it will be anywhere between 111 proof to 114 proof. It comes out of the barrel at about 114.

TWW: So you’re gonna be distilling and aging on site, ultimately?

Cook: Aging will be done about 10 miles from here in an area called North Point. We have a beautiful rickhouse over there that can hold up to 20,000 barrels.

TWW: Will that rickhouse be natural or climate-controlled?

Cook: It will be natural. In Maryland, very similar to Kentucky, we go through high heats in the summer and cold colds in winter, and that’s perfect for making whiskey, and especially rye whiskey, because we really do want the rye to seep into the barrel and get all those charcoal flavors and the sugars from the aging process. And we are hoping for some severe weather swings, although not many people in Baltimore would agree, but we do.

TWW: Can you talk a little bit about what a tourist can expect when they come to the Sagamore facilities?

Cook: We couldn’t be more excited to invite guests and tourers into the distillery. We built it for the community, and we want people to know the history of rye whiskey in Maryland, and really put Maryland back on the map as a premiere distiller of rye whiskey. And we hope that when folks come to visit us, they will feel the hospitality and the excitement that the team has here for the project, and will also get to learn a little bit about what Sagamore is doing, what makes Sagamore unique in the market, and also enjoy the whiskey. 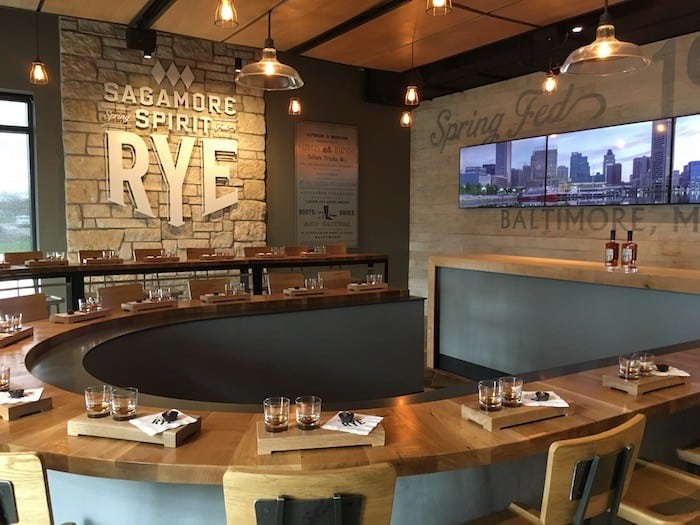 TWW: Talk a little bit about what that tour will be like.

Cook: The tour will be about an hour, and will cover the history of rye whiskey in Maryland; the Sagamore Farm, which is where we take the water from to cut the whiskey to proof; they’ll learn about our triple distillation process and get to walk through the stillhouse, which holds our 40-foot mirrored finish copper column still, and they’ll also get to bottle their own bottle of Sagamore Rye.

TWW: And what about the planned restaurant?

Cook: That’s going to open, probably, in the fall. And it will be tavern-style, of course, have a great whiskey selection there, and that will sit on campus and will be a great opportunity for folks to come down and take a tour and then have a bite to eat at the waterfront restaurant, or vice versa. Finish up at the restaurant and then take a tour of the distillery.

36
Shares
652
Views
Share on FacebookShare on TwitterGet Our Newsletter
Read More Whiskey News
Whiskey Review: Shenk’s Homestead Kentucky Sour Mash Whiskey (2020)
Cheers to the Dads! Personalize a bottle of his favorite whiskey to create a modern gift for the modern man. Use code: FATHERSDAY20 for $20 off your next order of $100 or more at ReserveBar