What Makes Maryland Rye So Different?

In early April, American Distilling Institute (ADI) held its annual conference in Baltimore, Maryland, where established as well as up-and-coming craft spirits producers from around the world gathered to talk shop. Among the highlights was an impressive display of vintage Maryland rye bottles and a seminar about the history of that industry led by Brian Treacy, president of Sagamore Spirits, who just a few weeks ago opened their own Baltimore distillery to the public (for the past four years they have been contracting their whiskey from MGP and using local spring water to bring it to proof, but are now in the process of producing their own).

Sagamore is one of dozens of new distilleries that have resurfaced in the state of Maryland, which was once one of the centers of rye whiskey production in the country. Prior to Prohibition, American rye came in two main styles: Maryland, known for its more delicate and sweeter characteristics, and Pennsylvania, the bolder, spicier, more robust variation. It’s a story we’re all familiar with when it comes to American spirits: Prohibition killed the distilleries, then the Big War waylaid their recovery, followed by the dark days of distillation that lasted till the late 1990s/early 2000s when everyone drank quality spirits again.

However, the Maryland rye story veers off that main road a little bit. Speaking of roads, there is even suitable speculation that after the Great Baltimore Fire of 1904, the city’s main drag, Light Street, might have been paved over the cellar of a warehouse that held 80 cases of whiskey!

I spoke to Treacy about the history of the Maryland rye industry and how the past has informed the current state spirits boom. 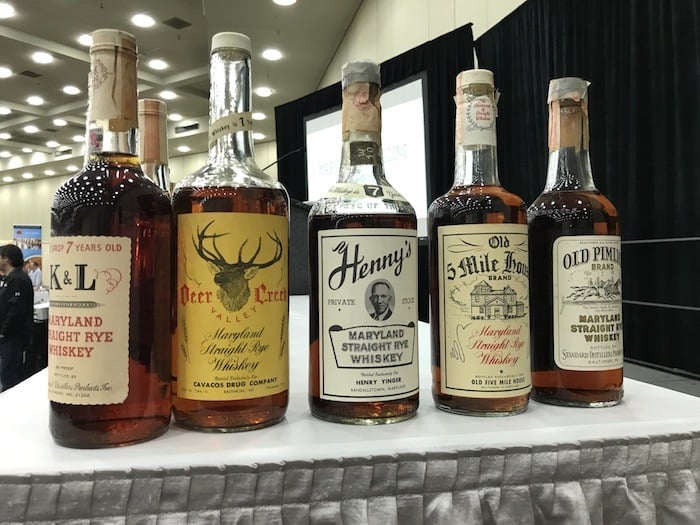 Amanda Schuster: Maryland style rye is characterized as having a softer, less spicy palate than more prevalent American styles. What gives it that delicate texture – is it the grain itself or the mash bill?

Brian Treacy: The reason Maryland style rye tended to be on the sweeter side is because it was often made with corn. Whereas, some folks might make a 100% rye where you really get that robustness.

AS: American whiskey as an industry took a real beating because of Prohibition and its aftermath. Why was the Maryland whiskey industry so particularly hard hit? Why did it take so long to revive even after the rye boom of the early 2000s?

BT: I think we competed against the War [World War II]. So many distilleries switched over to making ethanol. In Maryland we’re known as being especially patriotic. “Star Spangled Banner” and the “War of 1812” were written here and so forth.

The interesting part is that Maryland didn’t ratify the 18th Amendment in 1919. We have always been known as a free state – Maryland was opposed to Prohibition because it violated the state’s rights. We didn’t draw too much attention to it, but we still chipped along. You saw at the talk that I have all these cool rye bottles. If you look at some of these old bottles, you see dates like 1936.

AS: It was the so-called “medicinal whiskey”?

BT: It was medicinal, yes. We sold a lot. Also to other countries like Scotland. There’s an article discussing 2000 barrels of Sherwood rye whiskey cargo loaded onto a ship headed toward Scotland and England for medicinal purposes.

AS: That’s a lot of barrels. That’s bizarre!

BT: This is where I struggle – where are the rest of the details? There’s obviously more to it.

AS: Maybe they had to label them as such [medicinal] in order to make the trade?

BT: Yeah, it probably didn’t have much to do with “medicinal” use. It was probably a non issue once it hit the ocean. [chuckles]

AS: What were some of the most successful Maryland distilleries and brands?

BT: If you look at the old materials, the big selling point for these was access to the limestone water. Braddock rye, Walter’s rye, Sherwood was a big one, Standard Distillery had Pikesville rye – that one closed in the 1980s and Heaven Hill bought the name. So even folks in Kentucky saw value in Maryland spirits. Hunter is another big one. You see the term “pure rye” on a lot of these. “Baltimore pure rye,” “Hunter pure rye – the American gentleman’s whiskey.”

AS: So that was a marketing term?

BT: Maryland rye was considered so superior to the rest that I think it just earned that label. Even Mount Vernon used it. Calvert Maryland rye was another classic. That eventually became Seagram’s and then the first Diageo plant was here in Baltimore. Orient Baltimore rye, Monticello, K & L… We actually wanted to use “pure” on the back of our label and the TTB won’t allow it.

AS: That’s awesome! Ok, silly question, but let’s say aliens land on earth. They are friendly and want to learn about our culture, and they are introduced to distilled spirits from around the world. What would you want them to know about Maryland rye?

BT: That’s a good question! I mean, to me that’s no different than when I approach somebody who is not typically a whiskey drinker, and hasn’t heard of Sagamore. I like to hit on a couple of things: 1) Maryland had a great history and tradition of distilling rye whiskey and we’re in the process of bringing that back. 2) We do some things differently. We distill a high rye mash bill, almost 100% rye, and we also distill a barely legal mash bill, which means it’s just over 50% rye. And we age them separately, then we blend them at a certain ratio to make what we think is a complex, flavorful whiskey, yet approachable. So we get the flavors and the spices of the high rye, as well as the sweetness, for a nice, easy drinking and tasting whiskey, yet complex and flavorful.

Also hauling the water 22 miles from the spring to bring the spirits to proof is worth it.

AS: What is the significance of the three diamonds in the Sagamore logo?

BT: The diamonds come from the Vanderbilt family. Sagamore farm was started in 1925 by Alfred Vanderbilt. It was given to him for his 21st birthday from his mother to keep him off the racetrack (it was said he was spending more time there than his classes at Yale). It went on to become a legendary horse racing farm. He came up with the diamond design. So we use the diamonds to show our connection to the farm where we have the distillery.

There you have it. You might say the Maryland rye industry is once again off to the races!