Editor’s Note: This whisky was provided to us as a review sample by Heaven’s Door. This in no way, per our editorial policies, influenced the final outcome of this review. It should also be noted that by clicking the buy link towards the bottom of this review our site receives a small referral payment which helps to support, but not influence, our editorial and other costs.

The Heaven’s Door whiskeys were launched in early 2018 as a trio of American whiskeys, having been designed to be approachable for Dylan’s laid-back fan base and not just whiskey aficionados. Heaven’s Door is a collaboration between the well-known musician Bob Dylan and co-founder of Angel’s Envy, Marc Bushala. The name of course, was inspired by Dylan’s song Knockin’ on Heaven’s Door.

The three initial whiskey releases were a Tennessee bourbon, double barrel bourbon, and a rye. Each different release comes in a hand designed bottle featuring some of Dylan’s own metalwork, though the Bootleg series is going to be different. In the case of Bootleg, each release comes in a ceramic bottle, featuring Dylan’s paintings from over the years.

Currently, the whiskeys are sourced from undisclosed locations, though there are plans to start up a distillery in Nashville, TN in an old church built in 1860. “Rather than make a single whiskey or work with one master distiller, we thought it would be far more interesting to work with various master distillers and blenders to make whiskeys that would each have their own unique signature,” said Bushala at the time. “By working with different whiskey artisans for each new expression, the portfolio would be more diverse and eclectic.”

It is said the genesis of Heaven’s Door came when Bushala read that Dylan had registered a trademark application for “Bootleg Whiskey” in 2015. Bushala embarked on a mission to connect with the artist and explore ideas. Through a mutual friend, a meeting between the two was arranged. Together, they developed the idea of creating this new whiskey collection.

The Bootleg whiskey itself. This is where things get a bit murky. According to information from the brand, this is a whisky that is aged 26 years in ex-Bourbon barrels and then finished in Mizunara oak barrels. It’s also bottled at 111.5 proof. All good things. But what kind of whisky, or is it whiskey? From what I’ve read, most references to Bootleg veer towards the whisky side of things, likely Canadian. 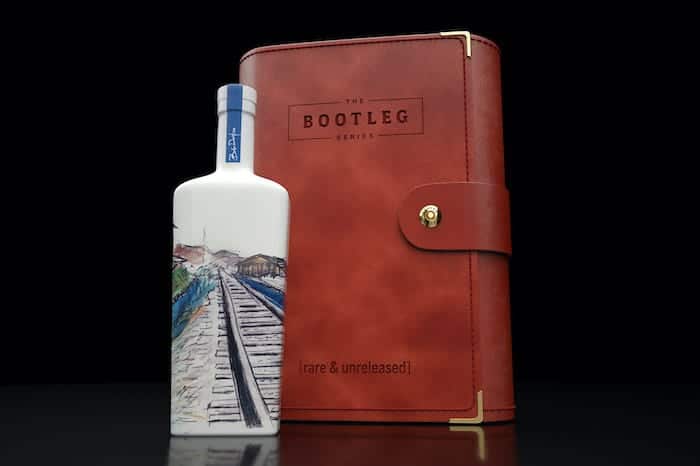 Appearance: Somewhere between a pale gold and a bright orange. The bottle comes with an individually numbered leather case to make it a collector’s item. The bottle itself is ceramic and hand-made, featuring one of Bob Dylan’s own paintings.

Nose: This one begins with plum and raisin, then delves into a light nuttiness. There’s also some background notes of vanilla bean and oak.

Palate: A medium bodied whiskey with a fairly long finish. Flavors of honeydew, vanilla, and a touch of clove spice. Given, the higher proof, adding a few drops of water bring out some of the more floral notes.

I thought this one was fun and interesting. Love the higher proof and the fruit elements, especially with the addition of a bit of water. It's definitely a whisky worth taking your time with. I just want to know what the heck it is, especially at a $500 price point for the bottle.