Editor’s Note: This whisky was provided to us as a review sample by Crown Royal/Diageo. This in no way, per our editorial policies, influenced the final outcome of this review. It should also be noted that by clicking the buy link towards the bottom of this review our site receives a small referral payment which helps to support, but not influence, our editorial and other costs.

I remember storing my marbles in a velvety purple bag when I was a kid. Most of my friends had the same bag to put their toys in. We didn’t know what it represented, but always enjoyed pretending that the bag held gold stolen by Robin Hood.

It may not hold gold, but that purple bag is known to whisky drinkers to carry a sweet, Canadian whisky that really kicks a party into high gear.

Towards the end of 2020 Crown Royal released the fifth whisky in their Noble Collection with their Rye Whisky Aged 16 Years. Dare I say, it’s something to celebrate.

This rare stock of Canadian rye is crafted from 90% rye mash whisky and aged in charred American white oak barrels for no less than 16 years. As a result, there is maturity to this iteration of Crown Royal that I can’t say is inherent to the brand.

As the world’s biggest-selling Canadian whisky brand, the distillery, located in Gimli, Manitoba, has been emboldened over the years to explore special releases and flavored whiskies.

The Noble Collection is an annual release that’s designed to highlight the “various techniques and styles” of their master blenders. The process allows the blenders to experiment with unique flavors and methods.

In general, I seldom prefer Crown Royal over other brands due to the sweetness factor. However, Crown Royal Rye Whisky Aged 16 Years hit different than the traditional whisky. The rye is mellow and clear, falling into the more traditional rye flavors that avoid heavy sugary notes.

What I love most about this release is the gorgeous bottle and label it boasts. The weighty bottle has a crystal-cut base and a resealable cork top, and the signature gold Crown Royal print gives a decadent vibe. 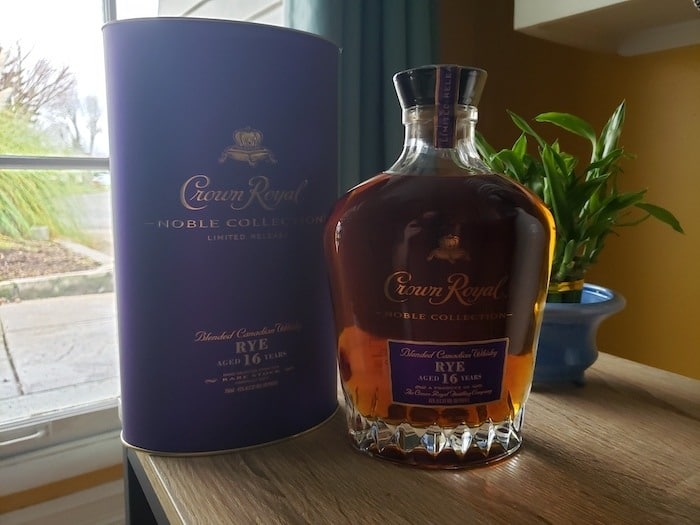 Palate: This has a very smooth, bold rye taste. I got anise and that same sweet vanilla from the aroma. The subtle heat lingers just long enough, before creating a warm, peppery cocoon in my belly. This is a fruity rye for sure, more dried fruits, not too sweet and thicker than normal Crown Royal.

If you like rye, I think you’ll like this selection. I would encourage those with preconceived notions about Crown Royal to push past that and give it a shot. The whisky matured nicely, bottled at a mellow, lovely lower proof. This would also work well with a favorite mixer, I’d like to try it with a Cherry Coke as I feel it would accentuate the stone fruit and vanilla of the whisky.