Editor’s Note: This whiskey was provided to us as a review sample by Walsh Whiskey. This in no way, per our editorial policies, influenced the final outcome of this review. It should also be noted that by clicking the buy link towards the bottom of this review our site receives a small referral payment which helps to support, but not influence, our editorial and other costs.

Watching, and tasting, whiskey’s worldwide resurgence has been fascinating, and part of the journey takes us right back to the isle where it all began.  For such a relatively small geographic place, the impact that Ireland has had on the story of whiskey is as large as any other. As joyful as it has been to hear tales told of expressions thought forgotten, as well as those who have maintained and continued on from their inception, new stories will always find a willing ear to bend.

When the husband and wife team behind Walsh Whiskey began crafting the story about the whiskeys that they wanted to create, it was rooted in the tradition of their homeland.  But their plan also had unique ambitions that they had hoped would get their vision across; Part of that was the opening of a new distillery. As with many of the best laid plans of all of us, sometimes things do not work out exactly as you had hoped, but that is all part of the story.

The Writers’ Tears expression from Walsh Whiskey has certainly become more familiar and recognizable to the whiskey drinking public.  Thanks to recently joining importer Hotaling & Co.’s portfolio, many of the unique cask finishes that were exclusive to certain parts of the world are becoming more available.

The expanded release of the Florio Marsala Cask Finish allows a greater opportunity for a larger audience to share in the story yearning to be heard. Casks that previously held fortified wine have long been a favorite of whiskey makers to add flavor and dimension to their whiskey, and marsala wine casks are certainly among them. And the 20% larger size of the Hogshead style of the cask provides some different interaction between the wood and whiskey while it is spending an additional 12 months in the cask. To balance out the sweetness of the marsala influence, the Florio Marsala cask finish is bottled at 45% ABV which is 5% stronger than the Writers’ Tears is usually bottled. 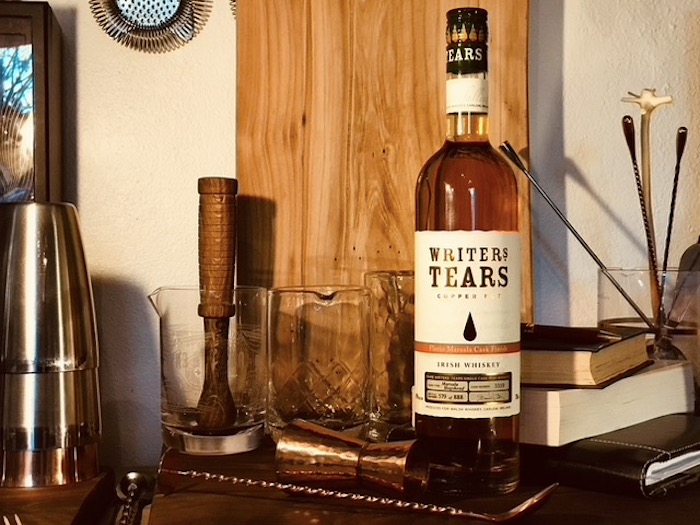 Palate:  Green apple continues, and astringent sweetness would lend itself to pairing with soft cheese and fresh-sliced orchard fruit

This whiskey begs to be paired with food. Though it could compliment any course, I would pair it with antipasti style foods. This bottle would be right at home in your picnic basket on a bright, sunny day.