Editor’s Note: This whiskey was provided to us as a review sample by House Spirits. This in no way, per our editorial policies, influenced the final outcome of this review.

House Spirits out of Portland, Oregon, has been a staple, and pioneer, in the craft spirits industry for a good number of years now. They are the original makers of Aviation Gin, which was sold off a few years ago before eventually grabbing headlines when famous actor Ryan Reynolds fell in love with the brand and became a partial owner. They are also the makers of Westward Whiskey, which has been forging its own path as being a standout American single malt whiskey, while also garnering an investment by Diageo-backed Distill Ventures. Many of the distillers at House Spirits come from a brewing background, so it isn’t a big shock to see this new expression of Westward Whiskey as an ode to the art of craft brewing.

“The roast and chocolate stout notes perfectly accent the malt profile of Westward, and this release speaks to our heritage in the Portland craft beer world.”

House Spirits, in producing this whiskey, initially aged it in your typical new charred, American oak barrels after double distilling its wash from 100% Pacific Northwest, two row pale malted barley. After a period of resting in these barrels, the whiskey is then finished in ex-stout casks for a period of approximately a year. These casks previously housed stout beer from a range of in-state breweries, including Bent Shovel Brewing, Breakside Brewing, Culmination Brewing, Ex Novo Brewing Co., Fort George Brewery, Migration Brewing, and Sky High Brewing, among others. The end result is a very Oregon product.

For now, the Westward Whiskey Oregon Stout Cask is an Oregon only release, but there are plans in the work to make this new permanent line extension a nationwide offering. 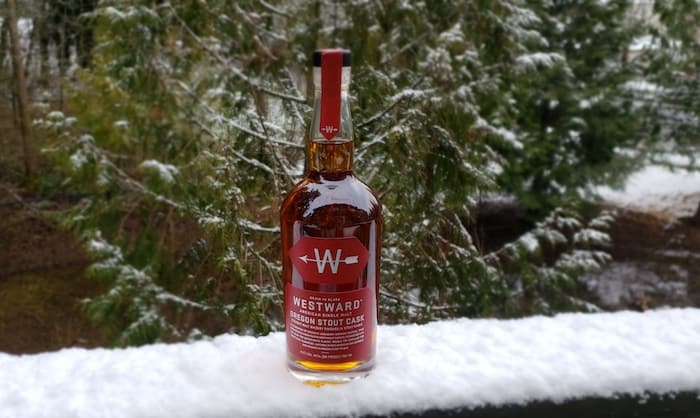 Nose: You can tell that it is high proof, but it doesn’t burn the nose. Over-ripe bananas stand out with black cherry. There’s a fine layer of baking spices; mostly cinnamon and nutmeg. I am surprised by the amount of fruit I am discover as I continue to sniff. There is a lot of citrus, though I mainly get orange, both zest and fruit.

Palate: Bitter at first, but the bitterness mellows out in the middle and finish. While the legs of the whiskey run slow down the glass and seem oily, the mouthfeel is quite the opposite; a bit heavy, but not oily. I get a random, faint saltiness with each sip.

The taste of oak is present throughout the sip, and stays in the aftertaste, but you can really tell how the Westward Whiskey Oregon Stout Cask was crafted. The stout is strong, and it releases the flavor of coffee and roasted cocoa nibs. For the finish, I get a bit of fresh orange. Warm toasted pecan and malt linger for minutes after finishing a sip.

I had a hard time deciding on a score and kept flipping between 3.5 and 4 stars. The stout finish is so pronounced that at room temperature, it feels like you're drinking a warm beer. As well, the bitterness from the stout can be off-putting for some, and to regular single malt drinkers I can see it being a turn off. Anyone who drinks craft beer will enjoy it for sure. I prefer this one on a big cube or as a boilermaker with any of the stouts from the collaborating breweries. It does work in cocktails like a Boulevardier, and of course an Old Fashioned.

I think it's a fine ode to the craft of brewing and distilling. I have high regards for the distillers at House Spirits, and the Westward Whiskey Oregon Stout Cask is a culmination of all their hard work.