House Spirits, based in Portland, Oregon, is always continuing to look for new and innovative ways to put their signature stamp on the ever evolving American single malt whiskey movement. They’ve gotten some high profile attention for their work, with spirits giant Diageo making an investment in them last year through a spirits accelerator program. What’s emerging now from House for their Westward whiskey label is a rather fascinating stout cask finished expression done in conjunction with some Oregon breweries.

The new Westward American Single Malt Whiskey Stout Cask Finish, according to those behind it, is made from a beer wash of 100% Pacific Northwest, two row pale malted barley. After the wash is brewed on site it is double pot-distilled, starting with a 3,000 gallon pot still and finishing in a 700 gallon custom pot still designed by Westward and built by a local metalworks company. 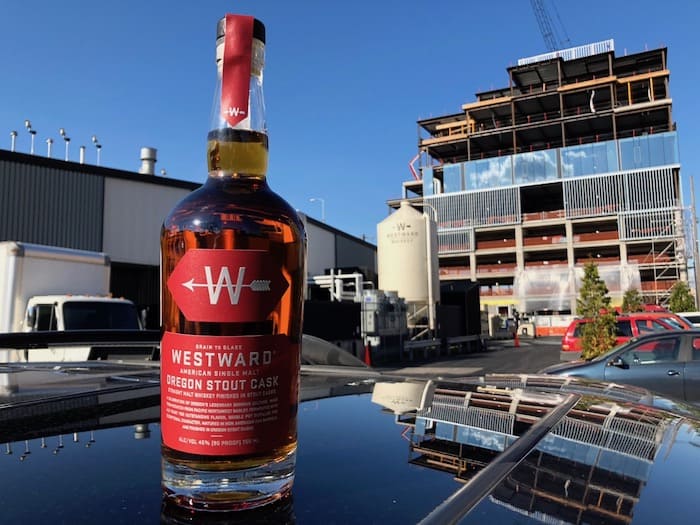 Following distillation the now un-aged whiskey was initially put down to rest in new, charred American oak barrels. After a period of resting in these barrels, the whiskey is then finished in ex-stout casks for a period of approximately a year. These casks previously housed stout beer from a range of in-state breweries, including Bent Shovel Brewing, Breakside Brewing, Culmination Brewing, Ex Novo Brewing Co., Fort George Brewery, Migration Brewing, and Sky High Brewing, among others.

Bottled at 90 proof, the Westward Stout Cask Finish is set to initially be available in Oregon shortly, with a nationwide roll out planned for later this year. It will price around $60 for a 375 ml bottle, or around $90 for a 750 ml bottle. You’ll find some limited official tasting notes below for your consideration.