Editor’s Note: These whiskeys were provided to us as review samples by Deutsch Family Wine & Spirits. This in no way, per our editorial policies, influenced the final outcome of this review.

Back in 2014, when we first wrote about Bib & Tucker, it was put out by 35 Maple Street Spirits, part of 3 Badge Beverage Company, which was based out of Sonoma, California. Bib & Tucker’s name harkens to a time when the term signifies donning your snazziest attire: The whiskey aims for that kind of quality effort as well.

In 2017, Deutsch Family Wine & Spirits acquired it, as part of its goal of adding more whiskeys (and ampersands) to its brand family. According to Bib & Tucker’s page on Deutch’s website, this Tennessee whiskey is double-distilled, using an extended column still followed by an old-fashioned pot still. It’s non chill-filtered, aged in No. 1 charred American white oak barrels for at least six years and has a mash bill of 70 percent corn, 26 percent rye, and 4 percent malt.

My tasting partner and I sampled three of Bib & Tucker’s bourbons: a six-year, and two 12-years from different single barrels. We previously reviewed the Bib & Tucker a few years back, so it will be interesting to see how it is now. 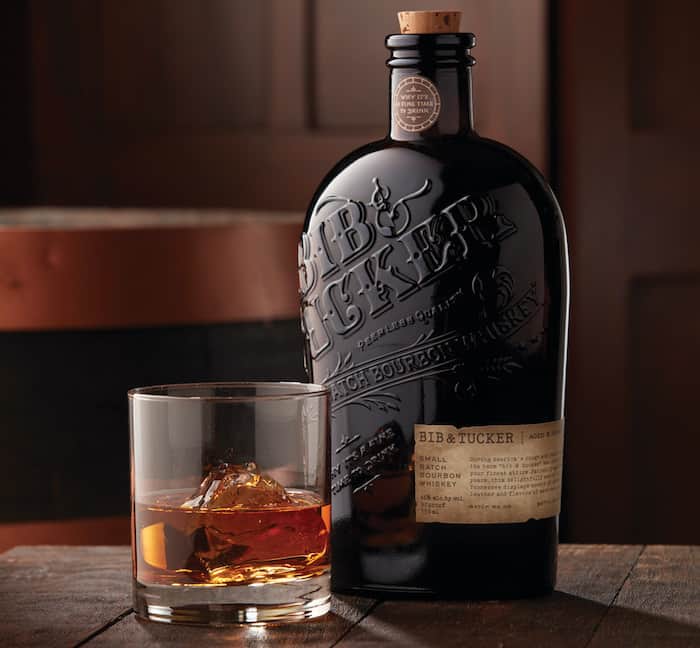 Appearance: Orangey, not super-vibrant. If the Steampunky bottle’s intent is to hide something, I’m not sure what it is? But the hue in the glass looks significantly lighter than the bottle would suggest.

Nose: Very vanilla. Like vanilla perfume. It’s a mellow, faded whiff. But my friend thought it smelled like acetone. Tasting is so weird, you guys!

Palate: It’s not bad! Very mild. Mellow on the nose and mellow on the palate as well. Inoffensive. A gentle entry point. The vanilla carries through, and floral notes bloom on the finish. In fact, it opens up a lot on the finish. Sort of like a wall anchor, when you hang something. My colleague neither liked it or disliked it. It’s not weird. Or unusual. But I like it, it’s like a dessert that might not be your thing but you have it and you’re glad you at least had something sweet.

Appearance: Much lighter and yellower than its predecessor. A pale gold, summer sunshine.

Nose: This smells a lot sweeter. My friend still got nail polish remover, and I got a more intense vanilla and caramel. A little Meyer lemon. Pungent, but not acrid.

Palate: So, this one burns. It’s high-proof that tastes high-proof, and only of high proof. It is a little clumsy. It doesn’t sing, it isn’t as well-rounded, is just one-note. Based on the nose I’d expected more complexity than I got. “It is what it is, and it isn’t all that great,:” said my pal.

Appearance: Essentially same color as the other 12-year, above.

Nose: This one’s less powerful, but smells very similar to the other 12-year, with an additional hint of pencil shavings and warm cedar.

Palate: Honestly it’s about the same as above. Ditto. This is fiery without being smoky. I wouldn’t give this or its barrel sibling to someone who doesn’t like whiskey, because it exemplifies what I don’t like about whiskey.

The Balvenie Launches Longer Aged Scotch Range In The U.S.

Benriach Introduces A Cask Edition Bottling Collection In The US Market