Deutsch Family Wine & Spirits, though it has been around since 1981, wasn’t initially a household name for lovers of whiskey. It changed this somewhat, however, with the acquisition of the Redemption Whiskey brand back in 2015. That brand is, incidentally, currently embroiled in controversy with Diageo over bottle designs. The resulting lawsuit battle hasn’t stopped Deutsch though from looking to bring more whiskeys into its family of brands, with the latest results of this being the acquisition of Bib & Tucker Bourbon and Masterson’s Rye.

Bib & Tucker Bourbon and Masterson’s Rye, until recently, belonged to 3 Badge Beverage Corporation, a company owned by the members of the wine-famous Sebastiani family. Each of these two brands now owned by Deutsch go in different whiskey category directions – bourbon and Canadian.

Bib & Tucker, which debuted back in 2014, is a premium American bourbon whiskey label that’s sourced and designed to be “a throwback to eighteen hundred’s American lingo when the words ‘Bib & Tucker’ were used to describe one’s finest attire. The design of the bottle is a nod to this era, taking the shape of an enlarged flask with ornate hand-lettering and deeply embossed embellishments.” 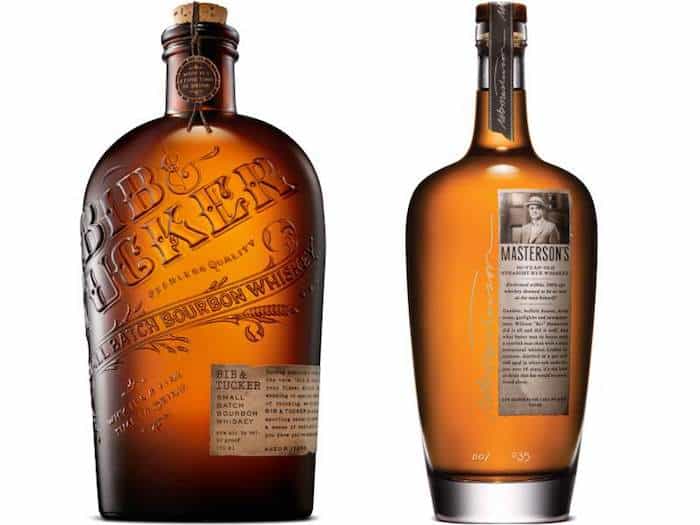 Production of Bib & Tucker has been small and limited under 3 Badge, but Deutsch plans to gradually ramp it up over the next few years. Masterson’s, meanwhile, is the bigger of the two fish. It is a sourced Canadian product that first came on the scene a number of years ago with rye, wheat and barley expressions that were either 10- or 12-years-old. These days the brand seems mostly settled on being a 10-year-old rye, which recently saw the addition of three barrel finished variants.

Information from Deutsch indicates the Masterson’s brand was named after “gambler, buffalo hunter and army scout William ‘Bat’ Masterson, a legendary frontiersman who made a name for himself in the U.S.” It comes in a bottle that’s well shaped and designed to show off the spirit’s signature color. It retails for $70 and while production is described as being small, sufficient aged stock exists, it is said, to quickly expand the brand to national distribution.

“We’re thrilled to bring Bib & Tucker and Masterson’s into our growing portfolio of super premium whiskey brands,” said Peter Deutsch, CEO, Deutsch Family, in a prepared statement. “Higher price segments are the most dynamic across the whiskey category and we are bullish on the opportunity for us to grow these two great brands. We are taking advantage of the opportunity to create a diverse range of whiskey brands with different mash bills, places of origin and price points. There will be other additions in the future.”