Like many of its siblings in the ever-growing global craft distilling market, Bib & Tucker Small Batch Bourbon Whiskey is part of what can seem a dizzying effort by distilling companies to establish old-fashioned credibility for a relatively new product.

Sold in a darkly-tinted, flask-like bottles embossed with ornate hand-lettering and flourishes, Bib & Tucker, the bottle states, is how one would describe dressing up in their finest attire during “America’s rough and tumble early days.”

That vision – the bottle design and the statement on the bottle – seem to have been unchanged from when it was first produced in 2014 by 35 Maple Street Spirits, a division of Sonoma, Calif.-based 3 Badge Beverage Company owned by preeminent vintner August Sebastiani.

While the brand was sold last month to Deutsch Family Wine & Spirits along with Masterson’s Rye, a company spokesperson told the North Bay Business Journal that they intend to keep “consistent sourcing for both brands.”

While I could find precious little about that sourcing, that apparently means that Deutsch will continue the pains 3 Badge reportedly took of bottling Bib & Tucker in Crestwood, Ky., as the bottle states.

Aside from that, Deutsch’s website indicates that Bib & Tucker is double distilled in an extended-column still and then a traditional pot still. Making note that the whiskey is not chill filtered like some other bourbons, Bib & Tucker is then aged for at least six years in No. 1 (lightly) charred American oak barrels and bottled at 46 percent alcohol by volume

To be clear, the bottle I tasted was bottled under 35 Maple Street, though, again, sourcing will reportedly remain the same for the time being at least. 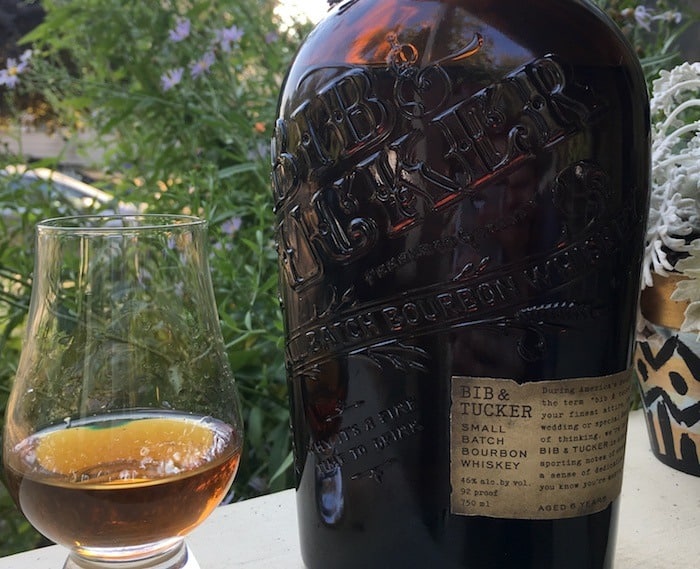 Vital stats: Double distilled, not chill filtered, aged for six years in No. 1 charred American oak barrels and bottled at 46-percent alcohol by volume. Sold in 750-milliliter bottles for about $55 each.

Appearance: The dark-brown tinted bottle makes it impossible to tell the color before pouring, but even in glass it’s darker than your average whiskey, like a reddish brass, though not so dark that it’s out of the normal range.

Nose: Wafts into the nostril with a sweet, tart flavor. It starts out with notes of sour apples, vanilla and a light oak with a hint of salt to give it a tropical feel. That changes to take the scent of mellower apples and pears and with a sweeter, richer layer that’s more like caramel with a touch of oak smoke and spicy notes like cinnamon to give it some complexity.

Palate: The first sip falls onto the tongue quite delicately, tasting mostly like light, watery molasses with very faint touches of apple and cinnamon. Spicy flavors of cinnamon, cloves and ground pepper gradually begin manifest themselves, starting as a light tingle on the tongue and marching outward through the rest of the mouth. Those flavors – with a soon barely perceptible undercurrent of brown sugar– build up intensity until they hit a sort of crescendo right after swallowing sending a burn across the mouth, cheeks, and a bit down the throat as the sip falls down the hatch. That burn hangs around for a few seconds, particularly around the cheeks, before fading into smoky caramel flavor in the mouth with a hum of tingles for another minute.

While Bib & Tucker ostensibly aims to walk a line between elegant and rugged, it tends lean toward the latter. While a perfectly fine drink, it left me looking for something more than it gave. The first sip started out promising with hints of interesting flavors as it gradually built in spice, but the spiciness turned out to be unrelenting and tended to overshadow any of the sweeter flavors. In the end, Bib & Tucker fell short of the give-and-take experience I look for in a whiskey. It’s still a better-than-average dram and probably a excellent ingredient in a mixer, but $50 per bottle might be a bit steep for what Bib & Tucker offers.