Editor’s Note: This whiskey was provided to us as a review sample by Evan Williams. This in no way, per our editorial policies, influenced the final outcome of this review. It should also be noted that by clicking the buy link towards the bottom of this review our site receives a small referral payment which helps to support, but not influence, our editorial and other costs.

About a month ago, I received the whiskey media kit to end all media kits. This thing was a beast. It contained a bottle of whiskey, two branded rocks glasses, a bottle of hand sanitizer, a face mask, a drink stencil, and a card with a number of recipes. Some of things are timely. I’m never going to turn down an extra bottle of hand sanitizer and masks are always a plus. (I did at first think the drinks stencil was an auction paddle, though.) All these doohickies lay in their own cutouts, as in an enormous toolbox, surrounded by some sort of Styrofoam, in a box so wide it barely fit into my outside recycle bin—its final resting place.

Now, I’ve bitched about extensive media kits a lot. Occasionally, I am pleasantly surprised. Mostly, I am not. The higher the concept of the materials surrounding the whiskey, the worse the whiskey. It’s the alcohol equivalent of a restaurant with a gorgeous view: The food is never good.

I get needing to stand out, and sell. But I really wish they’d put this time, money, and effort into the actual whiskey.

So when I got this filing cabinet-size behemoth for Evan Williams 1783 Small Batch, I felt conflicted. On one hand, Evan Williams is one of Heaven Hill’s brands, which I generally enjoy, particularly Pikesville and Larceny. On the other: More random brand tchotchkes?!

What’s a budding curmudgeon to do?

Anyway, onto the whiskey. As we reported in May, Heaven Hill redesigned its Evan Williams 1783 Small Batch, and brought the bourbon back to its original 90 proof. It’s now the second-highest proof as part of the Evan Williams brand. According to Heaven Hill, it won the 2019 Consumers’ 2019 SIP Award. Also, Evan Williams overall is also the world’s #2-selling bourbon, a fact that I absolutely did not know before researching it.

The new packaging features glass bottle with the Evan Williams signature blown across the top and “1793” displayed in gold foil across the label. The year commemorates when Evan Williams first opened his distillery on the banks of the Ohio River. 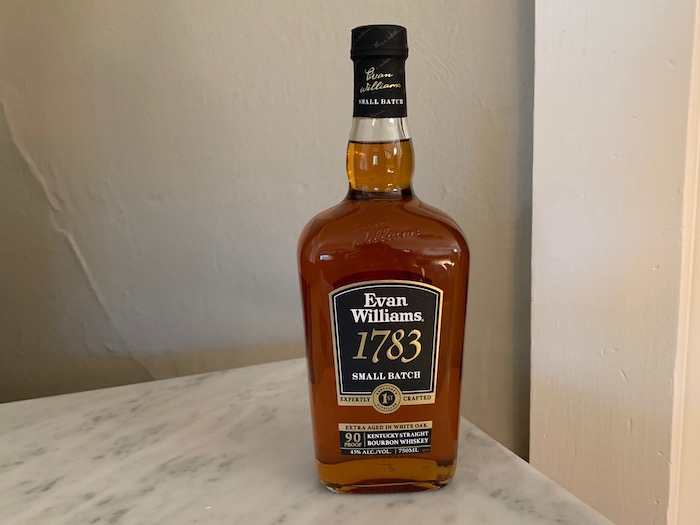 Appearance: In the bottle: ruddy. In the glass: beige. Light corn syrup, trending yellow. Paler than expected, in the glass.

Nose: I said corn syrup on appearance, and the nose is corny as well. That’s nice; it is corn season, after all. Also grainy and malted on the nose; not in texture but more like you’re in a silo, that sort of dusty grain smell. Finally—and this is a smell I always mock as like a pretentious thing to call out but it’s true here—pencil shavings. It really does smell like I just walked over to the pencil sharpener during the math test.

Palate: This is…fine. It’s pleasant. Said corn and malt carries on the palate and finishes kind of cereal-ey. More savory than sweet, more dry than rich. This whiskey’s web page features a lot of drink recipes; I think this would be good in one. I wouldn’t drink it on its own. I gave it a 3, but feel like it’s more of a 2.75. For a $20 whiskey, it’s ok?

It’s all right, I guess. Better than a sharp stick in the eye. But not worth the collateral trumpeting accompanying it.