I have, understandably, been drinking a lot of whiskey lately. I’m hoping a virus abhors a pickled self. But hey if you’re going to drink whiskey, it might as well be good whiskey (live, live, live!), and I’m happy to let you know about a very, very good one. But first, let’s get at some history.

Larceny Kentucky Straight Bourbon Whiskey was released by Heaven Hill back in 2012. You might know Heaven Hill from some of their other whiskey brands, such as Old Fitzgerald, Evan Williams, Elijah Craig, Pikesville, and Rittenhouse.

According to Larceny’s own website, Heaven Hill is the only distillery that’s currently producing and aging all styles of American whiskey: bourbon, rye, corn and wheat whiskeys. Like its sibling, Old Fitzgerald, Larceny uses wheat in place of rye as the secondary grain in the whiskey’s mash bill. That wheat can lend a smoother, silkier, sweeter taste to the whiskey. And as we’ve mentioned previously, the key depicted on Larceny’s label is inspired by John E. Fitzgerald, who as a treasury agent in the late 1800s/early 1900s was one of the only people legally allowed to carry the keys to the barrel storage rickhouses.

Last year, Larceny brought a new extension of the brand: Larceny Barrel Proof. It will be released three times a year: January, May, and September. Each release will have a different proof and consist of barrels ranging from six to eight years old, with a unique naming convention: 1) The alpha character shows which batch of the year this bottle is from; 2) the number that follows represents the month of the release; 3) and the last two digits point out the year of the release.

Therein lies about as much math as I can manage. Did I mention I’ve been drinking a lot of whiskey lately? 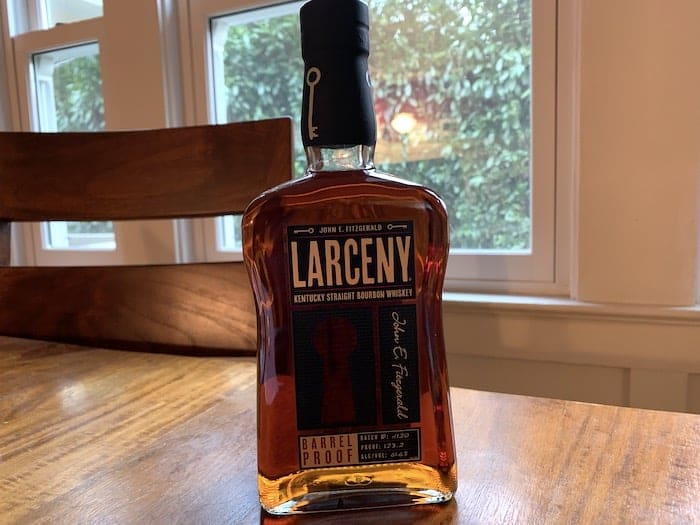 Appearance: I know it’s a scientific rule that lots of liquid looks different than a little liquid, but the difference in color between the whiskey in the bottle and the whiskey in the glass is significant. In the glass it’s the color of cinnamon, but in the bottle it’s the color of a cookie baked way too long but not burnt. Coppery but coppery brown, but coppery red.

Nose: This is high-proof, and it smells like it. Not acrid or ethanol-like, but like it’s definitely not your easy 80-ish proofer. Aside from its strength and power, there’s also butterscotch, ripe banana, persimmon, untoasted marshmallow, and the powdery sugar you get on mints. It doesn’t smell minty, but you know those individually wrapped mints that some restaurants have (bless you, restaurants, for your host table offerings)? You know how they sometimes have, like, a sugary powder on them? I guess it’s really just powdered sugar, but it’s somehow finer. That’s what this smells like. I’m fond of it.

Palate: It looks like cinnamon and it tastes like cinnamon. It tingles on the finish. If you don’t like tingly, drop a small ice cube into it. It’s not firewater, though. It’s very, very pleasant! I found the Old Fitzgerald delicious. But that’s more…accessible than this. This is not for whiskey neophytes, but it shouldn’t keep you from sampling. This whiskey has horsepower, but some of us like that. I like that.

Don’t make a Manhattan out of this. That would knock you on your ass. But if you want a little 123.2 proof splash of something in your glass that’s elegantly drinkable, have at it. Another nice aspect of this whiskey? It’s only $50. That’s not chump change, but it’s high-value high-proof: It tastes like an $80 bottle.