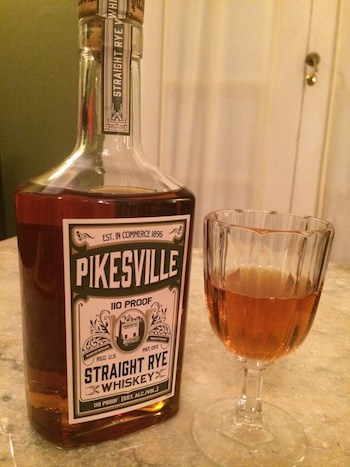 Maryland-style rye has been around since the Civil War. According to Pikesville’s site, from 1861 to 1865, the war brought thousands to Maryland and whetted their taste for this type of rye. Improved railways after the war helped distribute it.

L. Winn & Brothers Distillery was founded in Scott’s Level, Maryland, northwest of Baltimore: They began producing Pikesville Rye in 1895. Prohibition put the kibosh on the brand, along with the rest of the once-booming industry.

The brand reemerged after prohibition and became the last standing Maryland rye. When the Maryland distillery closed in 1972, the brand survived on existing whiskey stocks until 1982, when it was sold to Heaven Hill. Since then, it has been produced in Kentucky.

More than just a local designation, Maryland whiskey style provides a softer profile, using a lower rye content. The mash bill is reported as 51% rye, 39% corn and 10% malted barley. It is aged six years and clocks in at 110 proof.

The Pikesville’s color is lovely, resembling a long-steeped tea, with a mild nose of cocoa and oak. It starts spicy, surrounding your mouth with sparkly cinnamon, but it’s warming and welcoming. It finishes with subtle cherry. The whole tasting experience from beginning to end is consistently tasty. I didn’t find the spice overwhelming but if you’re not a fan of spicy I would avoid this one.

As for its high proof: Firewater this is not. For being so strong, it’s quite soft. I can vouch that it makes an excellent companion to fresh-out-of-the-oven chocolate chip cookies.

The Pikesville Straight Rye has already won Double Gold at the San Francisco World Spirits Competition and an Extraordinary, the Ultimate Recommendation at the Ultimate Spirits Challenge. For the consistent and charming experience the Pikesville provides from beginning to end,as well as its value ($50 a bottle), I give it an 86. You can hunt down a bottle of it online from a range of different retailers here.