Editor’s Note: This whiskey was provided to us as a review sample by Bulleit/Diageo. This in no way, per our editorial policies, influenced the final outcome of this review. It should also be noted some additional information was added to this story by the editor-in-chief of The Whiskey Wash to reflect ongoing abuse allegations against the brand’s founder Thomas Bulleit.

We’ll start the story of Bulleit whiskeys from the beginning. Augustus Bulleit was a tavern keeper in the 1830s in Louisville, Kentucky and wanted to make his own whiskey. After several trials and experiments, he settled upon a recipe that he enjoyed and is said to be one of a high rye variety. One day, while transporting barrels from Kentucky to Louisiana, Augustus is said to have mysteriously vanished.

From there, we fast forward toward to over 150 years later, when Thomas Bulleit, the great-great grandson of Augustus decides to leave a promising law career to follow in his ancestor’s foot steps. And thus, the Bulleit Distilling Company is born in 1987. As will happen, the brand was bought by Seagrams (later to become part of Diageo) in 1997, and continues to this day to be a popular series of sourced whiskeys across the rye and bourbon categories.

[The Bulleit brand, in fact, has become popular enough that a recent distillery of its own was opened in Kentucky. That being said, a recent series of physical and sexual abuse allegations against founder Thomas Bulleit by his daughter Hollis Worth have resulted in Bulleit stepping back as the brand’s public face. We bring awareness of this to you to keep you updated on the Bulleit brand itself – the review presented here is not influenced by what is going on. – Nino, Editor-in-Chief]

With regards to the whiskey I am reviewing, the Bulleit Rye 12 Year Old, it has such a high rye percentage, at 95%, that its production process can be a tad bit tricky. It’s a lot of flavor going on and finessing it all is key. Andrew Mackay is the master blender over at Bulleit and had this to say earlier this year about how it was all done:

“Whiskey is heavily influenced by barrel aging, and as a blender, one of our most important responsibilities is to taste how the wood impacts the flavor of the liquid and brings out different notes,” said Mackay. “The barrels we mingled to produce Bulleit Rye 12-Year-Old were hand-selected for aging based on early identification of their superior quality. Rye’s signature spiciness is certainly still prominent, and this extra aging complements that without being overwhelming as new levels of softness, clove character and vanilla and oak notes are evident. It’s a beautiful whiskey to sip slowly and responsibly.” 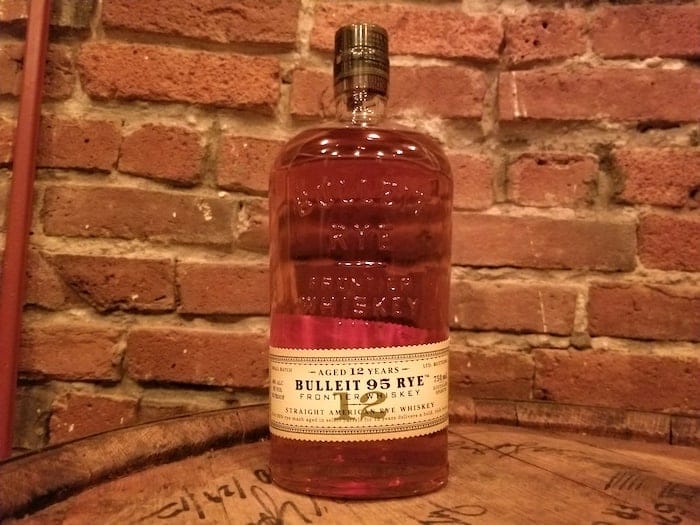 Vital Stats: Aged 12yrs. 46% ABV, 92 Proof. 95% Rye Mash Bill. This is the fifth release from Bulleit and the second in the line of rye whiskey options.

Appearance: Somewhere between a light red and dark orange.

Nose: A bright citrus up front, baking spice, and a touch of brown sugar.

Palate:  Big rye flavors, candied orange zest, with a lighter body. Some caramel and vanilla in the finish. Considering the mash bill, this is a well balanced whiskey and hits all of the notes that are characteristic of Bulleit products.

This rye whiskey is solid. Definitely more complex and interesting than the regular rye from Bulleit. Considering the price point versus value, I would chalk it up as worthy of picking up a bottle.