Bulleit Distillery Opens in Shelbyville, Kentucky Even As Expansion Is Considered

March 14th was emblematic of the high times currently enjoyed by distillers like Tom Bulleit and the Kentucky bourbon industry that’s helped make him famous. Both are on an incredible roll.

As the diminutive and dapper founder of Bulleit Distilling Co. prepared to cut the ribbon on an ultra-modern, Diageo-backed distillery in Shelbyville, Kentucky, he joked that he should go buy a lottery ticket. For the day was his birthday, his 30th wedding anniversary and 30 years since the longtime lawyer revived his family’s whiskey business.

The ceremony marked the near-completion of the $115 million project, which is the most significant distillery built in Kentucky—well, at least in the seven months since Bardstown Bourbon Co. began operations at a slightly smaller operation last September. A year before that, Michter’s Distillery opened a slightly smaller distillery in Shively, Kentucky. And amid those openings came Angel’s Envy‘s unveiling late last fall.

“As you can imagine, this is somewhat surreal for me,” Bulleit said. Recalling the first time he glimpsed the distillery’s fully constructed buildings from a distance, the ex-Marine and colon-cancer survivor said he asked himself, “How did this happen? This is absolutely incredible.” 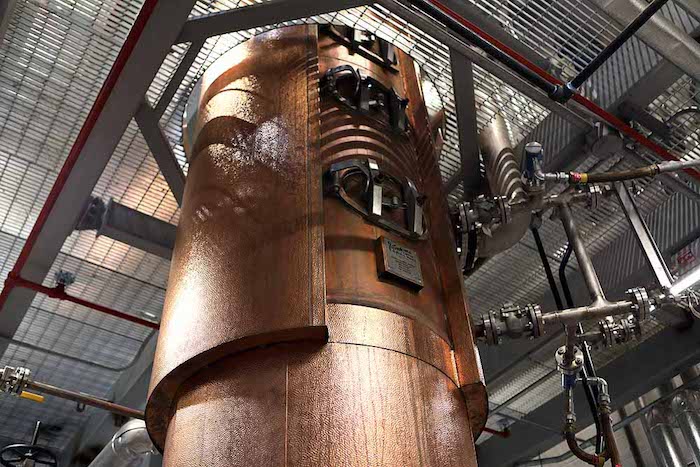 The answer is the popularity of his company’s bourbon and rye. In 2016, year-over-year sales of Bulleit whiskeys rose 29 percent, pushing six-bottle case sales past the 1 million mark annually for the first time. Deirdre Mahlan, president of Diageo North America, said that despite the new modular distillery’s 1.8 million proof gallon capacity, “we are already exploring expansion opportunities. Based on increased sales of Bulleit, we are looking at doing this sooner than later.” Additionally, Mahlan said Diageo is considering adding a visitors’ experience in Shelbyville to complement its existing tour at the historic Stitzel-Weller campus in Shively.

The new site would seem ideal. Set on 300 acres of countryside, the distillery’s modern structures are brand-new, hospital clean, and laid out with the precision of a Jeffersonian grid. Expanding here would not pose the problems it would at the historic Stitzel-Weller location.

During a brief tour, reporters weren’t allowed to photograph the distillery’s control room, which is more reminiscent of Mission Control at Cape Canaveral than a traditional distillery. No dials, knobs, or switches here, just an array of flat-screen monitors detailing the grinding, fermenting, distillation, and bottling the 15 to 20 million bushels of Shelby County grain to be delivered here annually.

For now, only bourbon is in production, and no timeline was given for rye. Beginning in nine, 20,000 gallon fermenters, Bulleit’s mash is fermented to an 8% ABV beer, then piped near the top of a 52-foot tall, 42-inch diameter Vendome copper column still. Once stripped, it flows to a doubler reclaimed from the old Stitzel-Weller distillery, and then pumped into 720 charred oak barrels each day. Barrels are palette stacked 25-feet high in four single-story rickhouses holding 55,000 barrels each.

In its effort to operate with minimal environmental impact, the spent mash is sent to a 50,000-gallon centrifuge that separates the spent grain from the backset. Backset is used in future fermentations and the grain is dried for livestock feed supplement. The site also employs the first industrial solar panel array in Shelby County, which collects enough energy to run all on-site mobile equipment.

When Andrea Wilson was director of whiskey strategies for Diageo North America, she worked with Pietro Di Pilato, senior vice president, technical, to find the Bulleit distillery site. Before the morning’s ceremony, Wilson, now vice president and master of maturation at Michter’s, recalled how the Shelby County location was little more than a muddy field laced with clothes-snagging thistles and thorns. But Di Pilato said the instant he saw it, he knew it was the right site, despite having visited dozens of others.

“From the moment we walked onto this property, it was love at first sight,” Di Pilato said. “Andrea took me to over 89 properties when we were looking this property. … And all I can say now is, what an amazing place.”