Versatility, your name is Buffalo Trace. Located in Frankfort, Kentucky, the distillery is responsible for some of the cultiest bourbons in the world (Pappy Van Winkle, Weller, etc.) as well as standby mainstream releases like the eponymous Buffalo Trace Bourbon.

But they’re also not afraid to swing at a few wild pitches. Case in point? The Experimental Collection, which has provided a home for the quirky, unusual, and sometimes just plain strange products emerging from dark recesses of Buffalo Trace’s warehouses since 2006. I guess making Eagle Rare day after day just gets boring.

The latest addition to the Experimental Collection is a Baijiu-style spirit “distilled like a whiskey” (in this case, that means fermented with distiller’s yeast and distilled on Buffalo Trace’s standard equipment) but made from a combination of sorghum and peas. (That’s not quite as weird as it sounds; thirsty people have tossed peas into beer for centuries.) The release is assembled from just three casks—a charred white oak cask, a toasted white oak cask, and an uncharred white oak cask—each aged for 11 years.

Baijiu is a traditional Chinese distilled spirit. Like whiskey, it’s usually made from grain, although it draws from a more expansive palette than whisky does: barley, sorghum, millet, rice, Job’s Tears, and peas are all regularly used. Instead of distiller’s yeast, baijiu distillers rely on a complex microbial culture called qu that contains yeasts, molds, and bacteria to convert and ferment their grains, usually in earthen pits that nurture centuries-old microbial cultures.

The resulting spirit has an intense, even bombastic flavor that tends to baffle Westerners. Baijiu can be simultaneously profoundly savory and flamboyantly fruity, with many also occupying the outer reaches of the horse blanket/barnyard spectrum staked out by Norman cider, bretty Rhône wines, wild-fermented craft beers, and washed rind cheeses. It’s an acquired taste, in other words—albeit one that a billion or so people have happily picked up.

This unusual installment in the Experimental Collection—baijiu ingredients, fermented and distilled like an American whiskey—offers a unique chance to find out just how much of baijiu’s distinctive flavor is a result of the raw ingredients, and just how much comes from that complicated fermentation process. After tasting Buffalo Trace Baijiu-Style Spirit, I feel confident saying the latter is far more important. 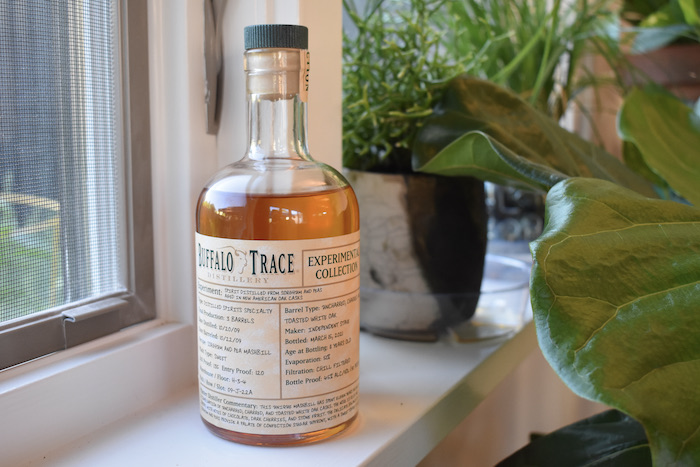 Vital Stats: An experimental spirit distilled from sorghum and peas. Aged 11 years in a combination of charred, uncharred, and toasted oak casks. 90 proof. MSRP $46.99 for a 375ml bottle.

Nose: An unusual combination of earthy, savory, and spicy. Dark chocolate, mushrooms, and green bell pepper jump out at first, followed by a musty kind of spice with cinnamon red hots, dried tangerine, and black peppercorns.

Palate: Dry, spicy, and vegetal, with an awkwardly thin mouthfeel. A core of powdery unsweetened cocoa powder is accented with cracked black pepper, cinnamon stick, sour orange, and wintergreen. It’s tingly on the tongue, with a warm, dry, bitter finish that brings sappy wood and that weird mentholated icy-hot sensation.

Great bourbon is all about sweetness and woodsy spice. Great baijiu is a vehicle for umami savor and piercing fruit. Buffalo Trace Baijiu-Style Spirit doesn’t really have any of those qualities. It’s vegetal in nose and palate, anemic in flavor, and unlikely to satisfy fans of either category. Still, a very fun experiment for the geeks.