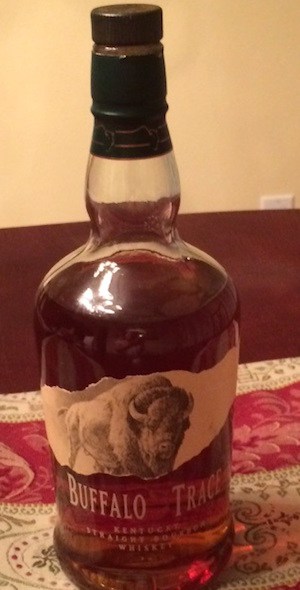 Buffalo Trace Distillery proudly proclaims itself to be the oldest continuously operating distillery in the United States, and traces its roots back to pioneers settling westward during the 18th century. Even during Prohibition, the distillery remained open through the creation of “medical” whiskey, and up through today has won a number of accolades for its products, including seven “Distillery of the Year” awards at various international whiskey competitions.

Buffalo Trace Kentucky Straight Bourbon, which is the distillery’s entry level American whiskey, is a masterful creation I found that particularly excels in bringing smoothness, subtle taste and crispness with each sip.

The name of the distillery and whiskey comes from the traces, or trails, left by people and bison walking across the plains. Aged for seven years in white oak barrels and arriving in a gorgeously curved round bottle, the whiskey pours out to give a moderately amber and orange color.

The aroma takes some effort to pick up, but it is immediately attractive and delicious, with full woody scents and sweeter and fruitier elements as well. The mash consists of corn, rye, and barley malt, and is responsible for the presence of flavors of fruits, nuts, and toffee. The vanillins released by the white oak during aging also deliver sweet vanilla flavors. Unlike many other basic whiskies, Buffalo Trace is unbelievably smooth and flows effortlessly through the mouth. A lot of whiskey possesses smoky and bitter flavors and may discourage some neophytes from consuming more whiskey, but there is very little of that in this bourbon. Smokiness is present in only a very small amount, which makes this bourbon a great choice for people who are new to whiskey and generally are not used to regularly enjoying whiskey. The feeling of drinking it is invigorating and inviting.

While the taste is consistently light and smooth, it’s a huge mistake to describe it as bland or boring. Not many other entry level bourbons can achieve the unique sort of soft yet memorable impression on the palate that Buffalo Trace generates. True craftsmanship is evident in the palate and finish. A robust flavor of woodiness and rich grains lingers for a long time.

Buffalo Trace is an incredibly affordable whiskey, available for only about 20 to 30 dollars for a 750 mL bottle. It offers a novel formula for bourbon, has some unconventional aspects and deserves all the praise and prizes it has received over the years. Some whiskey drinkers might crave a smokier and more intense flavor, but there is plenty to enjoy and admire about this bourbon.

I give the Buffalo Trace Kentucky Straight Bourbon a rating of 93.

Derek Sun hails from hot and dry Los Angeles and currently enjoys living in cold and rainy Portland. He taught himself to appreciate whiskey through many glasses and a few hangovers, and is always trying out new drinks around the world.