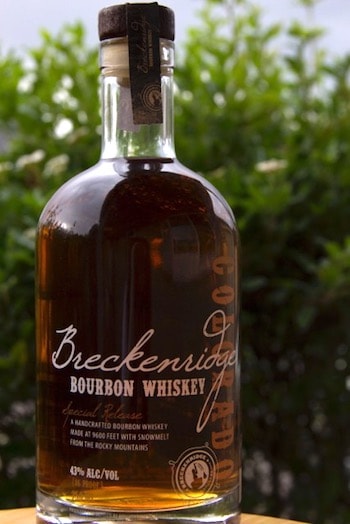 Perched at a 9,600 feet, Colorado’s Breckenridge Distillery has cheekily dubbed itself “The World’s Highest Distillery.” Indeed, Colorado was stealing headlines for its progressive marijuana litigation in 2012, but Breckenridge kept an old-fashioned vice at the forefront as it merrily cleaned house during the 2011-2012 spirit industry awards season. The recipient of numerous accolades, Breckenridge’s Bourbon won gold at the 2011 Wine and Spirits International Competition, and the 2012 International Whiskey Competition.

Bryan Nolt founded Breckenridge Distillery in 2007, beginning a sort of hipster rags-to-riches whiskey tale that includes Nolt selling his house to keep the distillery afloat. Almost ten years later, the Distillery That Could has proven itself to the whiskey world and warmed the hearts of fans worldwide.

Breckenridge Distillery Special Release Bourbon is a blend of sourced bourbons (Kentucky, Tennessee, and Indiana) and in-house whiskey that’s been mashed, fermented and distilled by the distillery. It is considered a high-rye bourbon.

Appearance: Reminiscent of a warm caramel sauce or maple syrup

Nose: Initial whiffs of creamy sweetness—perhaps a buttery concoction of corn and baked apple pie. There is a definite spiciness that tingles the back of your nose like a light pepper sneeze.

Palate: Smooth like honey at first taste, the creaminess of the corn is pleasantly balanced by the rye’s robust character. A hint of char tags along behind the oaky kick before disappearing, almost without a trace (a tinge of pepper lingers). Overall, this bourbon goes down easy with all the feels of a cinnamon spiced cider in autumn.

While Breckenridge Distillery Special Release Bourbon’s immaturity and mildly shadowy origins may work against its perception, don’t let the ideological concerns cloud your taste buds. This is a fun and delicious bourbon that will melt the snow right off your boots.

Score: 85/100 [SHOP FOR A BOTTLE OF BRECKENRIDGE BOURBON]

328
Shares
6.3k
Views
Share on FacebookShare on TwitterGet Our Newsletter
Get The Macallan® Rare Cask at ReserveBar. Shop now!