Editor’s Note: This whiskey was provided to us as a review sample by Baltimore Spirits Company. This in no way, per our editorial policies, influenced the final outcome of this review. It should also be noted that by clicking the buy link towards the bottom of this review our site receives a small referral payment which helps to support, but not influence, our editorial and other costs.

Settlers in the original colonies of the United States found it difficult to grow wheat, and they hadn’t mastered growing corn. Rye on the other hand was fairly easy to grow, and it also provided the ground with more nutrients for seasonally rotating crops like tobacco. Bread wasn’t the only staple made from rye grain. Like their ancestors before them, they used it to make beer and whiskey.

In recent years, distilleries have been popping up all over to put Maryland back on the map as a whiskey purveyor. All of them have their own goal to bring customers a true Maryland style rye whiskey. But just what is the true Maryland style?

Maryland rye whiskey had a particularly distinct flavor and feel. Typically triple distilled, Maryland rye also was sweeter than rye whiskies from the west. However, there is little to no historical documents of recipes for the spirit. Before 1906, when the Pure Food and Drug Act was created, anything from caramel color to fruit juice could be added to whiskey, which could account for the sweetness.

Pennsylvania was also producing their own rye whiskey, so it wouldn’t take much for the two styles to meld.

Founded five years ago by three friends, Baltimore Spirits Company began making and aging their Epoch Straight Rye Whiskey in charred American oak barrels. Epoch Straight Rye was first launched in 2018. While other Maryland distilleries imported MGP to grow their brand, Baltimore Spirits Company was said to be the first to distill it. They do so using a pot still modeled off those at Lagavulin. That definitely keeps in line with the “Old World distillation techniques” combined with “artistic craftsmanship to create expressive spirits that can only come from bold, forward-thinking experimentation.”

Many seek out the distillery’s award-winning Epoch Straight Rye Whiskey, but you can typically only buy it at the distillery, located in the Baltimore Collective Union Building, or Maryland liquor stores. So let’s see how the current release ranks… 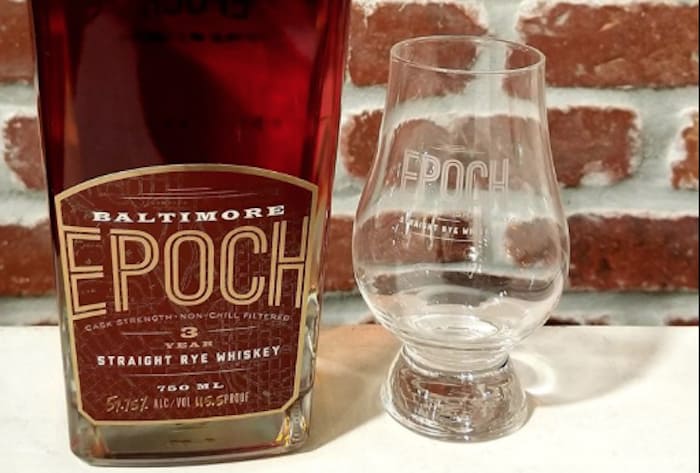 Nose: The nose is delightfully sweet. Bright vanilla and fresh orange zest are at the forefront. Cinnamon and nutmeg linger in the middle. Graham cracker peaks out near the end and makes for a welcomed surprise.

Palate: The orange is strong while the vanilla comes in waves. Surprisingly, the whiskey has the perfect balance of sweetness with the orange, vanilla, and a touch of honeycomb. The mouthfeel is oily and rich on the tongue. The whiskey warms you up like liquid heat. On the other hand, for 115.5 proof it isn’t overpowering.

From the rye comes heavy cinnamon, allspice, and nutmeg characteristics on the finish. The spices aren’t overpowering either. Graham cracker stays on the breath after sipping. As it warms up in your hand, chocolate and espresso notes appear with a bit of dry oak.

This is my jam. I love the spice on it from the rye, but it isn't overpowering. It is full of complexity. I still can't believe it is 115.5 proof. If you're a rye drinker looking for something new, then this is a bottle for you. It reminds me of Pikesville Rye blended with the Old Forester 1920, both are my favorite whiskies separate, but Epoch Straight Rye Whiskey has given me a new favorite in one bottle.

It would pair nicely with a clove cigarette, which I may do while swaying in my hammock. Feel free to add ice or water, but it is perfect neat.