Editor’s Note: This whiskey was provided to us as a review sample by 10th Street Distillery. This in no way, per our editorial policies, influenced the final outcome of this review. It should also be noted that by clicking the buy link towards the bottom of this review our site receives a small referral payment which helps to support, but not influence, our editorial and other costs.

This is single malt whiskey which doesn’t come from a place or a spelling that you would expect: San Jose, California. I don’t want to say the same thing that my fellow esteemed reviewers have passed along, so to recap: As we mentioned in May and February of this year while reviewing their STR Single Malt and Peated Single Malt American Whisky, respectively, 10th Street Distillery was founded in 2017 by Virag Saksena and his business partner – and former college roommate – Vishal Gauri in San Jose, California, after spending six years in research, development, and finding the right space.

Before that, Saksena, although a home brewer and Scotch lover, didn’t know how to make whiskey. He spent two weeks apprenticing in the Islay region of Scotland to learn as much as possible, and fully realized a vision of not just creating a premium whiskey—but to speed up the process.

So thus inspired by Scotland tradition and American pluck, 10th Street’s Peated Single Malt: Distiller’s Cut is made by sourcing peated barley from Scotland along with water from Sierra snowmelt, aged in bourbon barrels. This particular release varies from the normal peated one in that the “unique Distiller’s Cuts [taken] during distillation create a bolder and smokier, yet smooth single malt, designed to appeal to malt and peat lovers.”

10th Street’s ingenuity is obviously translating into awards: placed a Double Gold at the 2019 NY World Spirits Competition and a Gold Medal (Best in Class) at Whiskies of the World in 2018. 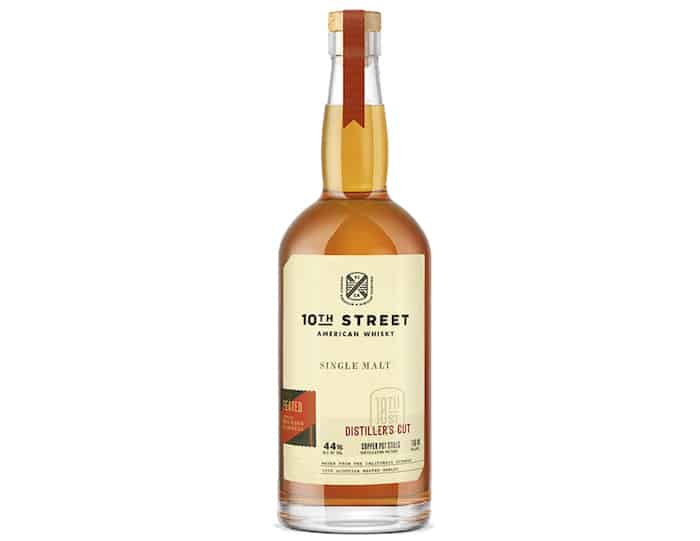 Appearance: Ginger ale at the end of the night. Very light. Yellowish. A slight green tinge in its light yellow.

Nose: Peaty! Peat, peat, peat! I opened the bottle, and the peat slapped me in the face. Peat! I know I am sensitive to it, but dear lord. It’s clutching at me like the wispy fingers of a cartoon smoke character. Subsequent whiffs bring shoe leather, glue, and tire tracks.

Palate: At the beginning, some sweetness, like marionberry or currant. But then, almost immediately, that shoe leather flavor sweeps in and completely ruins it for me. I don’t get it. I’m sorry. This is a palate annihilator. Its so strong! I imagine this is like how cilantro tastes like soap to some people.

I appreciate that this whiskey exists, but I cannot appreciate it. Call my palate broken and me broken inside (many have) but this tastes like I rubbed on bug spray into my arms and legs and then forgot to wash my hands and ate a sandwich.