Editor’s Note: This whiskey was provided to us as a review sample by 10th Street. This in no way, per our editorial policies, influenced the final outcome of this review.

10th Street was founded in 2017 by Virag Saksena and his business partner – and former college roommate – Vishal Gauri in San Jose, California. The idea was sparked about six years prior for Saksena, who was a homebrewer and Scotch lover, but didn’t know how to make whiskey. He spent two weeks apprenticing in the Islay region of Scotland to learn as much as possible, and fully realized a vision of not just creating a premium whiskey, but doing so in less time.

Gauri, a chemical engineer and fellow whiskey aficionado, helped to problem-solve — and they eventually developed a whiskey that met their standards and only took just over a year to produce. Now, with production being formally established and expanded since 2017, the distillery today produces about one barrel each day.

10th Street’s line currently includes two whiskies, both of which are single malt varieties and are “hand crafted” and distilled in custom cooper pot stills. While the STR Single Malt is non-peated, the Peated Single Malt straddles American and Scottish tradition as it is created with specially peated malt imported from Scotland that the distillers believe is synergistic with San Jose’s water and means the water doesn’t need to be treated.

The Peated Single Malt Whisky also earned the “Best in Class” gold medal at the 2018 Whiskies of the World competition, and Double Gold at the New York World Spirits Competition this year.

Here, we dive into the Peated Single Malt Whisky. 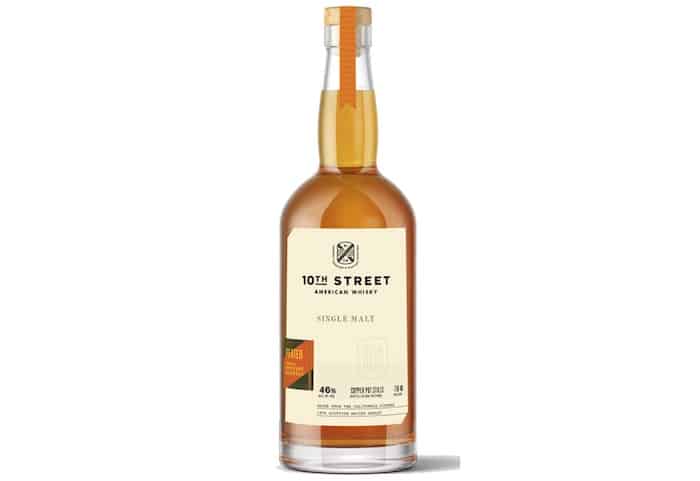 Vital Stats: Made with peated barley sourced from Islay, high-mineral water from the California Sierras snowmelt and aged in bourbon barrels for a non-specified period of time. A graphic on the label indicates the finished peat level falls right in the middle of light and heavy. It’s bottled at 46% ABV; a 750ml bottle retails for $65.

Palate: Creamy butterscotch flavors are balanced out by a prominent yet not overbearing smokiness throughout, and sweet notes of baked red plums. The finish lingers with a zippy char and peat.

While peat smoke is dominant in this whisky, it doesn't completely overshadow other nuanced flavors. This is a really nice expression, likely to be enjoyed by those who seek out single malts and peated spirits.