American
Reviews
By Courtney Kristjana / May 8, 2020

Editor’s Note: This whiskey was provided to us as a review sample by 10th Street. This in no way, per our editorial policies, influenced the final outcome of this review. It should also be noted that by clicking the buy link towards the bottom of this review our site receives a small referral payment which helps to support, but not influence, our editorial and other costs.

You probably think there is a spelling error in the title of this review. However, 10th Street is a distillery that wants to break with the status quo by basically making scotch in the US. Legally they can’t call it scotch, but on the other hand, nowhere in the rule books does it say whiskey made in America needs to be spelled with an “e.” What you get is a delicious single malt that ranges in peat levels. As well, the single malts produced are founded on the premise of being “uniquely Californian” with “Scottish tradition.”

Founded by Virag Saksena and Vishal Gauri, both engineers– infrastructure and chemical respectively– and scotch whisky enthusiasts, they apprenticed for two weeks in the Islay region of Scotland. After some thought about how to make single malts, they realized they didn’t want to be old men before they could enjoy the fruits of their labor. Hence, they started 10th Street Distillery in 2017; a whole 6 years went into research, development, and finding the right space.

The main reason it takes so long for scotch whisky to mature is the climate in Scotland, but in San Jose, the process to make a single malt can be conducted faster to appease the impatient scotch lover. Saksena and Gauri do import their malted barley from Scotland, and for their peated recipe, the malt is specific to go with the heavy alkaline water in San Jose. Just as scotch distilleries reuse casks, so does 10th Street Distillery; all the whiskey matured in ex-bourbon barrels.

As a scotch lover, like Saksena and Gauri, I’m curious to see how their unpeated American Whisky STR Single Malt compares. You can also check out our review of the 10th Street American Whisky Peated Single malt. 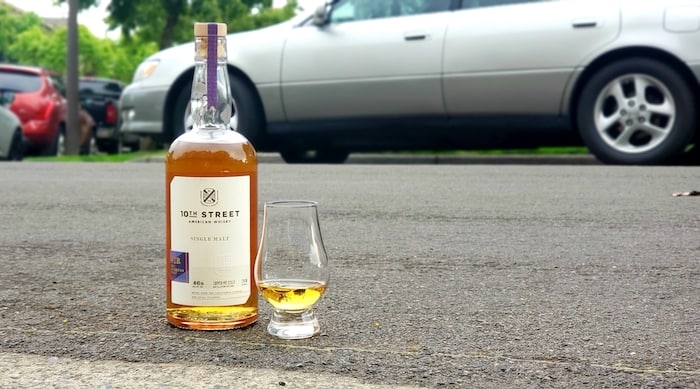 Nose: At the beginning of the nosing, I get a subtle clove honey paired with candied orange peel. There’s a slight peat reek in the middle, but it comes off like a sour mash more than anything. There is a nice balance between the alcohol content and flavor profile. It doesn’t burn the nostrils or even come across as having an ABV of 46 percent.

Palate: The mouthfeel is extremely soft and kind of airy. The dram doesn’t burn the tongue, but it warms your throat and belly going down. The honey is there, but the sweet orange peel is the highlight. The Scottish terroir is still present from the imported barley. It has a strong heather flavor in the profile. On the finish, I get a sort of cigar ash taste.

The 10th Street American Whisky STR Single Malt is a bit too young and doesn't give me quite a full palate profile as I would prefer. However, it is still good, comparable to Glenmorangie, Caol Ila unpeated, and Monkey Shoulder. The orange peel is pretty fervent, and I wish it was more subdued, but it makes one hell of an old fashioned.