Editor’s Note: These whiskey glasses were provided to us as review samples by their respective brands. This in no way, per our editorial policies, influenced the final outcome of these reviews. It should also be noted that by clicking the buy links below our site receives a small referral payment which helps to support, but not influence, our editorial and other costs.

When I got two different kinds of whiskey glassware to review, it made me wonder about the original drinking vessel for whiskey and how, exactly, we got to this point.

According to sipdark,: In the 1500s, the only cup used to drink whiskey was known as a quiach, a small wooden cup. The word was derived from “cuach” – a Gaelic word meaning “cup.” The design looked a lot like a shallow bowl. It was constructed from wooden staves and had small handles on both sides. Eventually these became adorned with silver. Cool Material shares stories of Scottish clan leaders using their quiach to display wealth, power, and hospitality.

In the 1800s, wooden cups gave way to glass tumblers, which were far easier to mass-produce. This then led way to all kinds of other glassware manufactured for the single-minded purpose of imbibing whiskey. In 1992 a group of whiskey experts got together at the Riedel glass headquarters in Austria to test a variety of new glasses, developing the  vinum, which resembles an elongated thistle on a shortened stem.

2001 brought the Glencairn shape into being: As sipdark explains, the glass was developed by the Glencairn Crystal company and inspired by traditional nosing copitas, which have long been used in whiskey labs throughout Scotland. The shape of the glass allows the drinker to experience the full flavor profile by letting only the harsh alcoholic vapors escape.

Are classics classics for a reason? Newer kids on the block such as The Diamond Glass from Dragon Glassware and NEAT, the Ultimate Spirits Glass aim to take notice among a newer generation of drinkers. Using Black Butte Whiskey as my control among these vessels, I set out to sip. 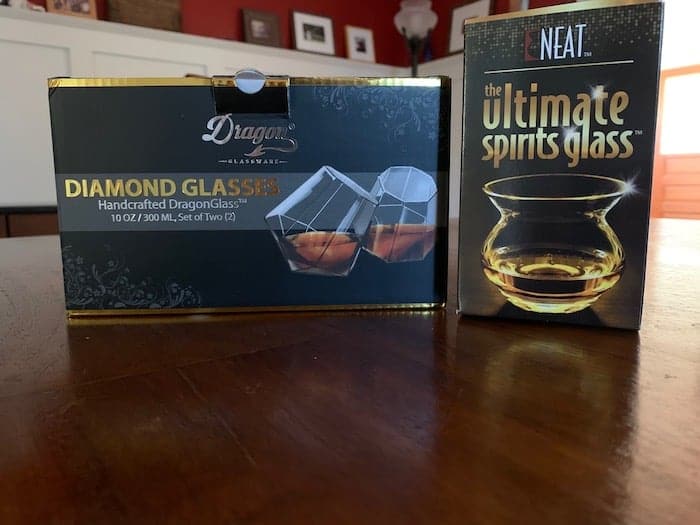 NEAT stands for Naturally Engineered Aroma Technology (NEAT), so already it’s gimmicky. It prides itself on several main differentiators in how you drink when you drink with NEAT. The glass has a large surface area, providing more areas to appreciate (what I say to myself after too much holiday indulgence and too little exercise). Its curved sides allow the drinker to appreciate the swirl (again, same post-holiday principle), and its wide rim allows the harshness of alcohol smells to dissipate and prevent nose-burn.

ScotchNoob describes the presumed science behind it in detail, but I’ll summarize: The short roundedness of the NEAT glass lets all the bad out and keeps all the good in.

When I take a glass from the box and palm it, it looks like I’m about to drink from a vase. Like a tiny vase mated with a small Venus of Willendorf statue. The large curve or lip of the glass looks like something I’m going to bang my teeth against. This seems counter-intuitive to sipping, no? Yes, indeed! Drinking from the NEAT glass made me sort of curl my lip back and shove my teeth forward into a kind of sneering bunny facial position.

Maybe the width does encourage burn dissipation, but I’ll tell you what: You will not look even remotely sexy drinking from this glass.

Dragon Glassware is a designer glassware company out of Northern California which makes home accessories including beer steins, coffee mugs, whiskey stones, and soup bowls. The diamond serves as inspiration for the drinker to watch their drink aerate as they swirl it around the glass (like…you would with any other glass?). Diamond’s schtick is that the glass sits at a 50-degree angle to be spill-proof: less tumble in your tumbler.

The diamond is of course also known for its durability: All Dragon’s glassware is made using what the company refers to as DragonGlass,  a type of borosilicate glass they claim is the strongest glass on the market. It’s heat- resistant, insulates hot and cold drinks, and is dishwasher safe.

In hand, this glass is very thick. It doesn’t have the delicacy I expect in drinking glasses. Unlike the slimness of the classic Glencairn I normally drink out of and the swirl of the NEAT, this seems clunky in comparison. With the design being that it’s unspillable because it’s already on its side, I see that as more novelty than function.

It feels a little like those thick plastic glasses you bring out to the hot tub, even though this is glass. It might be durable but it feels cheap. You can purse your lips drinking from it, so you don’t look quite so boorish as you do with the NEAT glass, though.

We previously reviewed Dragon Glassware’s whiskey decanter set. I feel like this, along with the decanter, wants to be the heights of class to which soap operas aspire, but the feel of it is more like props for a high school production of Anything Goes. I don’t want to put anything on its side other than myself after a few whiskies.