Editor’s Note: These products were provided to us as review samples by Pappy & Company. This in no way, per our editorial policies, influenced the final outcome of this review.

Carrie Greener wants to get one thing off her chest right away. “We don’t have it flowing in our cabinets, either,” she says of her family’s legendary bourbons. “What few bottles we get, I usually donate for school auctions or something.” Greener concedes that she usually keeps one bottle around the house to share with friends who haven’t tried it before, but that’s it.

Greener is a fourth-generation Van Winkle – of those Van Winkles. Her dad is Julian Van Winkle III, president of the Old Rip Van Winkle Distillery in Louisville, Kentucky. Her brother is Preston Van Winkle, the distillery’s marketing manager. Her family makes some of the world’s most coveted whiskies through their partnership with Buffalo Trace, produced in small batches with limited distribution, sought after and sold for top dollar the world over. 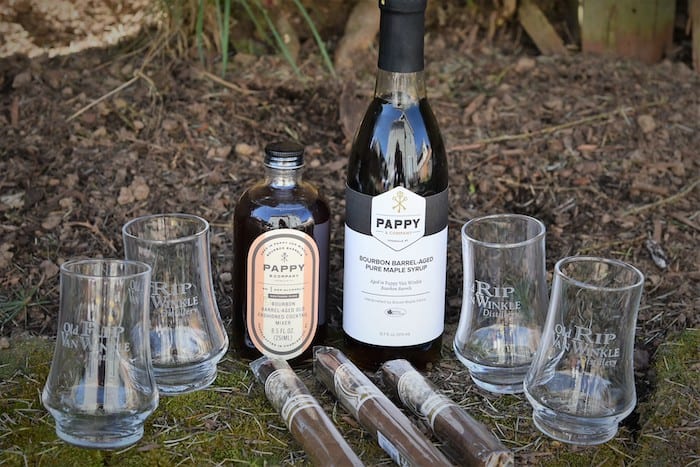 Greener is a Van Winkle triplet – along with sisters Louise Breen and Chenault James – who together founded and run Pappy & Company. It’s not a spinoff company, exactly. More of a (you knew it was coming) sister company to the Old Rip Van Winkle Distillery. Pappy & Company has a licensing agreement with the brand, and uses the family’s bourbon barrels to age other products.

Pappy & Company sells cigars, clothing, glasses and dishware, and a wide variety of branded products from cutting boards to golf-club covers to coffee and hot sauce and biscuit mix. Greener is responsible for product development and “overall brand vision,” Breen runs day-to-day operations and human resources, and James manages her own design firm while remaining as “team adviser” at Pappy & Company.

Greener says the sisters founded the company seven years ago with a small handful of items that were already closely associated with the distillery. Cigars, for example. “Smoking a cigar was one of Pappy’s favorite pastimes,” she says of her great grandfather. In the years since, they’ve expanded far beyond anything the distillery’s founder could have imagined.

“We like to say we’re a brand inspired by bourbon, heritage and tradition,” Greener says. These days, though, the breadth of products carrying the Pappy & Company label has as much to do with the partner businesses as it does with the products themselves. “We love working with other small businesses, with private companies,” she says. “We naturally kind of fit in that small family business model, businesses that care about making a great product.

A recent sample box of products shared with The Whiskey Wash included, for example, Bourbon Barrel-Aged Old Fashioned Mix branded by Pappy & Company and made by Bittermilk LLC in Charleston, South Carolina. Even for a devoted whiskey drinker who tends to forgo mixed drinks, it was astounding elixir. It’s not cheap, at $19.50 for 8.5 ounces, but you don’t come to Pappy looking for cheap. You come for quality, and the Old Fashioned Mix delivered.

Similarly, a 375ml bottle of Pappy & Company Bourbon Barrel Aged Pure Maple Syrup sells on the company website for $38, quite a bit more than the brands you see on the shelf at your local grocery store. But Mrs. Butterworth’s never tasted like bourbon barrels, either. This version, made in partnership with Bissell Maple Farm in Jefferson, Ohio, is a rich-tasting treat for whiskey drinkers.

Tom Hallman Jr., a Pulitzer-prize winning writer and devoted cigar aficionado in Portland, Ore., happily agreed to smoke the three barrel-fermented Pappy & Company Nicaraguan cigars that arrived among the samples.  (A “Robusto,” a “Toro” and a “Churchill,” for those keeping score at home.) Hallman admitted to wondering whether they would be good, or if they were simply trading on a famous bourbon name. His review after smoking: “Pappy has created a wonderful cigar: Smooth and mild, burns evenly and has a nice aroma. Very pleasant. Very good.”

All Pappy & Company products should leave that sort of impression on customers, Greener hopes. Sure, theirs is a famous name in whiskey circles. But if the products themselves don’t live up to the name, the whole thing falls apart.

“Seeing what Pappy did and what my dad does, we don’t want to do anything to risk that,” she says. “In a world that’s so made up of fake stories, there are still honest, true, real brands out there. We want to be one of them.”