When's the Best Time of Day to Taste Whiskey?

I’ve heard many theories about the best time of day to taste whiskey, not all of them compatible. Some people say the palate is most sensitive in the morning, while others say we’re more attuned to flavor and aroma later in the day. While my personal experience points towards morning as the best time to taste new things, my initial research turned up little in the way of confirmation.

Which made me wonder, could it just be my imagination that I smell and taste more skillfully in the morning? 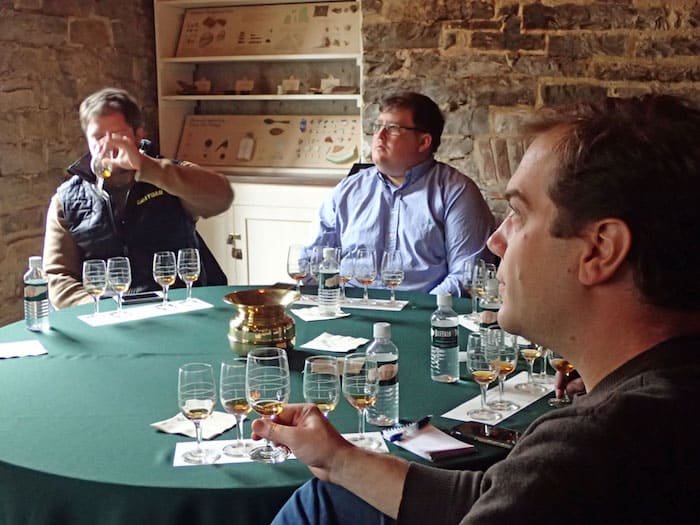 To find out more, I contacted Aimee Hasenbeck, sensory specialist at the Food Innovation Center at Oregon State University. I asked her if there was any truth to the notion that morning was a better time to taste things. She said she personally thought there was some truth to the idea that mornings are best, but that time wasn’t the only important factor when considering sensory sensitivity.

“Many factors need to be taken into account,” says Aimee, “such as the product itself, what one has eaten prior to tasting, human physiology/biorhythms, environment, etc.” To control for all those factors, she says formal taste evaluations “are recommended between late morning (10 am) and lunch, so people are not too tired or hungry. Tasting later in the day isn’t recommended, because people are likely to have palate fatigue and are often not as engaged.”

Yet interestingly enough for whiskey, she also said that best practices in sensory evaluation call for the product to be sampled at the time of day when it’s normally consumed, a strike against the 10 a.m. tasting session (for most of us, at least). And, of course, it’s also important to pay attention to what you’ve consumed beforehand.

Read More Whiskey News
Column: To Pick Or Not To Pick: The Single Barrel Conundrum

“Tasting just after meals, smoking, or coffee—when taste acuity is decreased—is not recommended,” she says. In other words, if you’ve just eaten a spicy Indian curry followed by a cigar, you won’t be tasting much of anything, no matter what time it is.

69
Shares
1.3k
Views
Share on FacebookShare on TwitterGet Our Newsletter
Cheers to the Dads! Personalize a bottle of his favorite whiskey to create a modern gift for the modern man. Use code: FATHERSDAY20 for $20 off your next order of $100 or more at ReserveBar